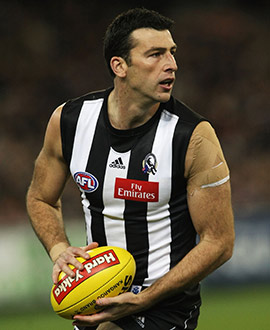 Considered one of the plum picks in the 1995 National Draft, Collingwood chose Prestigiacomo with its first pick at that draft – the No.10 selection overall.

As an 18-year-old, he played the last 12 games in a row in 1996, but in 1997 he contracted glandular fever midway through the season and was weakened for a year.

He played on the ball and in attack throughout his junior career even extending to his time in the under-18s, but the influence of assistant coach Danny Frawley saw him groomed as a defender.

He needed to build up his physique to match up with key forwards, but in the summer of 1998-99 he had to drop the gym regime after having an operation on his shoulder despite the promising start he had a tough second year, making only six senior appearances in 1997 due to form and illness problems.

Prestigiacomo was one of Collingwood’s unsung heroes in 2000 as he was effective is just about every one of his 21 games. He was equal third in the club best and fairest behind Nathan Buckley. As the Collingwood defence lacked height he was often required to match up against bigger men.

Early in 2002 he spent more than the usual amount of time on the bench, but then re-affirmed his importance to the back-line structure. Late in 2003 he injured a knee, but returned for the finals where he represented the club in its second consecutive Grand Final.

Shoulder problems cut deep into his 2004 campaign and restricted him to just 12 games, but he had one of his best ever seasons in 2005 and ran fourth in the best and fairest. Prestigiacomo’s low-key style was the cornerstone of the Magpie backline.

Foot problems kept him out of much of 2007 and then the first half of 2008 when he ended up playing just two games.

Remarkably he came back to have one of his best seasons in 2009, recording a ninth place in the best and fairest and receiving recognition in the initial 40-man All-Australian squad, but in 2010 his season was restricted by thigh and groin injuries.

Picked to return for the Grand Final against St Kilda, Prestigiacomo showed typical honesty in telling selectors he did not believe he was sufficiently right to play. In his place, young backman Nathan Brown successfully quelled Nick Riewoldt in successive deciders as the Magpies went on to win the Grand Final Replay.

After retiring, Prestigiacomo took up a role in administration at the club.