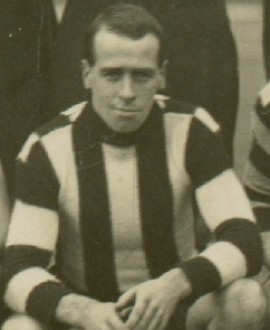 For a handful of magical seasons at the end of, and just after, the First World War, Collingwood was blessed with a centreline to rank with the finest the club has ever produced – Tom Drummond and Bill Twomey Snr on the wings, with Charlie Pannam Jnr in the middle.

All three were brilliant, highly skilled players capable of producing a game-changing burst of wizardry. Twomey and Pannam were the quickest and the most well remembered, at least partly because of their famous family names. But Tom Drummond was nearly in the same class as a player – and he was the only one of the three who actually got to captain the club.

Thomas ‘Chick’ Drummond came to Collingwood for his senior debut in 1916, having previously played with the Collingwood Districts side where he’d been part of a flag side in 1915. He had always seemed likely to end up at Victoria Park, with his uncle Dave Drummond having played for the club in the 1890s.

Although small and relatively lightly built, Tom was unfazed by his elevation to senior ranks and seemed immediately at home. After making his debut in Round 5 against Carlton, the Football Record noted that he had “created a favourable impression”. “[Though] on the small side he showed no sign of fear when it came to a trial of strength with heavier men,” it said.

Drummond missed only one game for the rest of the year and continued to draw positive reviews. “Drummond added to his reputation as a cool, clever player,” wrote The Winner. “He marks well for his height, handles the ball cleverly, and always turns his opportunities to the best advantage. He is a young player who improves with every game. He has a sure pair of hands, and rarely fails to hold the ball if he can touch it.”

The parts of his game that drew so much early praise continued to be his trademarks throughout his career. He was a wonderful, sure ball-handler, especially in wet conditions, and very good at evading players. He was a clever footballer who had footy ‘smarts’ within a game. And his marking for a small man was remarkable: he could leap over packs with ease, and had a happy knack of timing his leaps to perfection so that he hit the ball at exactly the right moment. Gordon Coventry once said he “could mark over a pack like Dick Lee” – and there’s no higher praise than that. And once he had his hands on the ball, very few seemed to slip through his grasp. He was also a hard-working player, slightly more consistent and less mercurial than his flashier colleagues in Twomey and Pannam.

Coventry also noted that, despite not being quick, Drummond was incredibly hard to catch. “He was elusive – when grabbed he could twist out of an opponent’s hands like a shot and get away. Never did he miss his kick, and all of them went in the right direction.”

In 1918 The Sporting Judge said Collingwood had few better players than their “natty” winger. “Not as spectacular in his methods as colleague Pannam, he is, on the whole, more consistently effective, and less prone to spoil good work by attempting too much,” it said. “It is the winding up kick that tells, and Drummond rarely fails to put the boot in good and hard.”

Drummond became an integral part of the Magpie teams, playing on the wing in both the 1917 and 1919 Premiership triumphs. In 1921 he enjoyed a particularly fine season, one for which he would later share with his fellow centreline player Pannam the club’s retrospective Collingwood Best Player gong, awarded in 2017.

That year’s output seems to have played a significant role in the club’s decision to award him the captaincy for 1922, taking over from Dick Lee. Despite his quality, consistency and experience, the appointment came as a surprise to some. He was still regarded as one of the best wingmen in the game, and had twice represented Victoria in the years leading up to his appointment, but somehow he hadn’t really emerged as an obvious leadership candidate before then.

Nevertheless he enjoyed a good season in 1922 (despite suffering a bout of pleurisy late in the year), before shocking the club by leaving to take up a coaching job with Williamstown in the VFA. But when the VFL delayed his clearance, the Seagulls grew impatient and instead gave the job to former Magpie Charlie Laxton, leaving Drummond to head to first Benalla, then Murtoa and Albury – prematurely ending his Collingwood career (ironically, both Twomey and Pannam had also left the club for big money coaching opportunities). He returned in 1926 and played some practice matches with the Magpies but ended up at South Melbourne, where he played five matches alongside, and under the coaching of, his old centreline comrade Charlie Pannam.

In the end, those five games with South took his VFL career total to 99 – just short of what would have been a deserved milestone. The 94 games he’d played at Collingwood were high quality, consistent and full of merit. But fans of the era were left lamenting what might have been if the ‘three amigos’ of Drummond, Pannam and Twomey had stayed longer together at Victoria Park.