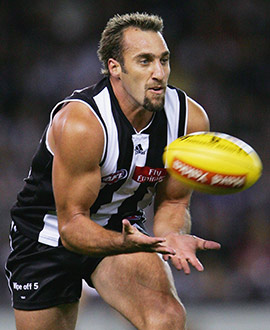 Originally from North Reservoir-Lakeside, Rocca starred for the Northern Knights at under-18 level and he made it quite clear that he wanted to remain with his family in Victoria and did not want to move to Sydney – the club that had first option on his services.

Despite his protests Sydney went ahead and picked him with selection No.2 at the 1994 National Draft.

At first he steadfastly refused to move north, but late in 1995 he went to Sydney on a commuter basis and played 12 games. The stay extended into 1996, but it was always on the cards that he would return to Melbourne, and presumably the same club as his elder brother.

Rocca would say later that he was denied a game in the latter part of 1996 because the club knew he was going to leave, but coach Rodney Eade strongly denied it. He and two others were allowed to run out with the Sydney team for the 1996 Grand Final, but it turned out to be his last appearance in club colours.

Collingwood traded Ben Wilson, Mark Orchard and a draft pick to Sydney so they could bring him to Victoria Park.

He showed the capacity to haul down big marks and kick long goals in his first year with Collingwood in 1997, but his overall performances were nothing exceptional.

He began well in 1998, but was thrown out of gear by suspension in the early part of the season and was subsequently dropped on three occasions. The club was so concerned about his lack of stamina that he was sent to the Australian Institute of Sport in Canberra for tests on lactic acid build-up.

But in 1999 he showed more stamina and had a far more satisfactory year, running second in the best and fairest to skipper Nathan Buckley. He played in a variety of positions and furthered his football education in the process. A move to defence was the turning point and by the season’s end he was able to return to attack with a more rounded view of the game. His prodigious kicking ensured that he could create forward thrusts from the defensive zone.

Again in 2000, Rocca’s form went from poor to sheer brilliance and demonstrated that if he could find consistency and a bit of endurance he would have been one of the top players in the competition. He kicked the winning goal against his old side at the SCG early in the 2000 season and played several other outstanding games. His 33 goals topped the Magpies’ goalkicking.

In 2001 he continued to have endurance problems and at the end of the season he had problems with osteitis pubis which cast a shadow over his future.

He played an exceptional game in Collingwood’s losing Grand Final side in 2002, but in 2003 was suspended after the 2003 preliminary final and his absence proved crucial in the loss.

He started 2004 in solid form, but was plagued by recurring ankle problems and his season finished after round 17.

Rocca snapped an Achilles tendon just four weeks into season 2005 and came back in good touch in 2006 although the latter part of his season was patchy when he seemed to be troubled by his shoulder injuries.

He had a good 2007 season, but ongoing ankle problems meant he only had seven games in 2008 and doubts emerged over his future.

Groin and achilles problems restricted him to just four games in his final year, though he still raised one final effort to appear in the club’s Qualifying Final against St Kilda.

A committed clubman, Rocca provided part-time assistance to Collingwood’s VFL team in the first two years that followed his retirement before taking on a full-time development role in 2012.