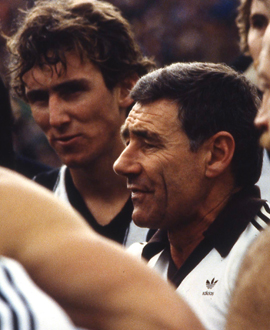 Peter Daicos listens in as Tom Hafey addresses the players.

Coaching in the AFL is a notoriously demanding task with very little in the way of job security. Which makes it all the more remarkable that Collingwood has appointed only 16 men as full-time senior coaches in its history, with a further two appointed as mid-season caretakers.

Of course, that low number is helped considerably by one man having held the post for an incredible 38 seasons. That man was Jock McHale.

McHale is arguably the most famous name in Collingwood history. He’s certainly been the game’s most fabled coach, not just for his longevity and games record, but also for his achievement in piloting the club to no fewer than eight Premierships. It’s no wonder that the AFL has named its award for each season’s leading coach after him.

But the club has also had plenty of other outstanding coaches along the way, such as Phonse Kyne, Bobby Rose, Tom Hafey, Leigh Matthews and Mick Malthouse. Not all of them have enjoyed the ultimate footballing success (Rose, in particular, was desperately unlucky). But every one of them has given his all.

That applies even to Collingwood’s two most short-term coaches. Ron Richards filled in while Neil Mann was coaching the Victoria team in 1974, and is officially credited with a coached-two-won-two coaching record. The other historical anomaly came in the 1930 Grand Final, when Jock McHale was sick in bed at home. While no coach was appointed for the day, Treasurer Bob Rush delivered a famously stirring half-time speech so is sometimes credited with having a coaching role on the day (though not officially by us or the AFL). Good trivia questions, those two.

Of course there were no coaches in the club’s earliest days, with off-field preparation usually handled by the captain, in conjunction with the head trainer. Match-day moves were the province of the skipper. The club’s first coaches were senior or recently retired players. It was not until 1977, when Tom Hafey came across from Richmond, that Collingwood finally looked outside its own nest for a senior coach.

But no matter their background, every single one of Collingwood’s coaches has put his heart and soul into the job, devoting huge reserves of time and energy into taking the Pies as far as he could. All that work is aimed at one thing – returning the Magpies to the top of the tree. As fans, we always hope that moment is going to come next season. So do our coaches.