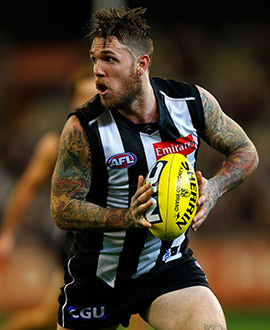 A player who represents one of football’s most remarkable rags to riches stories. Taken deep in the 2001 National Draft, Swan was considered to be little more than a battler with limited ability after his first four seasons at Collingwood. With a laid back approach to the game, the boy from Westmeadows in Melbourne’s north-west suburbs was on the verge of the football abyss before a heart-to-heart with coach Mick Malthouse and some strong leadership from teammate Ben Johnson helped reshape his attitude ahead of the 2006 season.

In the years that followed, Swan made incredible improvement to the point where he became the 2011 Brownlow Medalist, and earned the label of ‘untaggable’ from many commentators. A strongly built midfielder who is dangerous if released to half forward, Swan’s unique ability to repeatedly out-sprint his opponents, allowing him to power from contest to contest, made him Collingwood’s most consistent player of the Malthouse-Buckley era. Criticised earn on by some for his occasionally errant kicking, Swan’s disposal was soon considered to be as good as any other.

His barrel chest meant he could hunt down the ball at the stoppages and explode away from them courtesy of his deceptive pace. Far from a front runner, Swan averaged 84.4 tackles between 2007 and 2011. He also had ability to make himself a threat in attack, be it around stoppages, outrunning his opponent when the side’s in possession and when isolated one-out where his underrated ability overhead made him the complete package.

After a disappointing and injury-plagued 2014, he returned to stellar form in 2015, running second in the Copeland Trophy. He began the 2016 campaign well, starring during the NAB Challenge, only for a rare foot injury suffered minutes into the season opener against Sydney to end both his season and his career.