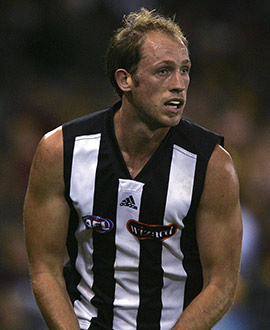 Seldom had a youngster attracted such enormous attention prior to being drafted.

Collingwood signalled its intention to draft the talented Fraser with the No.1 pick in the 1999 National Draft long before draft day arrived.

His height gave him a big advantage to start with and he had plenty of skill as well. On top of those attributes he had excellent goal-kicking skills.

Collingwood insisted when it made Fraser the number one draft choice in 1999 that he would be eased into AFL football and would be lucky to play more than a handful of games in 2000.

Fraser, however, proved very early that he was ready, willing and able to step up to senior ranks right from the start of the season and he made his debut in the round one clash with Hawthorn.

He did well in that match and held his place in the side until he missed one match with a hamstring niggle mid-season.

Fraser exceeded expectations in 2000 and continued to develop nicely the following season, although his form tailed off later in the year under the demands placed on him. No eyebrows were raised when he was suggested as suitable for a leadership position in 2002.

He was hampered by osteitis pubis throughout 2002, but still managed to play every game and he came to the fore in the Preliminary Final and Grand Final, kicking three goals in the gallant nine-point loss to the Lions in wet conditions.

In the 2003 Grand Final he played a lone hand with Anthony Rocca serving a suspension and won respect for his efforts.

A big workload was thrust on him in 2004 and at times he seemed to struggle, but still managed a top 10 finish in the club best and fairest.

As the club’s lead ruckman he was a key figure early in 2006 and his athleticism meant he had a solid year.

The workload in 2007 wore him down at the end of the year when he missed the club’s epic finals against West Coast and Geelong due to a back injury and then in 2008 he injured a knee while representing Victoria against the Dream Team which restricted him later in the season, although he managed to lead the team to a win over Adelaide in the Elimination Final in the absence of captain Scott Burns.

A steady 2009 ended with a below par finals series and in 2010, with the combination of Darren Jolly and Leigh Brown’s renascence, he struggled to get a senior game, reaching the 200 milestone in the last home and away match.

Despite performing well at VFL level, Fraser was traded to Gold Coast at the end of the year where he played 18 senior games in the Suns’ first two seasons.

After his retirement, Fraser became a Collingwood life member and served as the coach of the Gold Coast reserves.