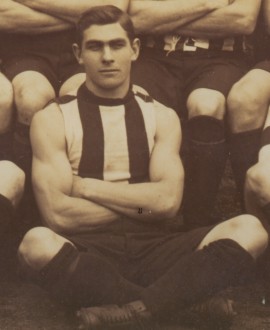 ‘Pen’ Reynolds found out early in his VFL career what a great leveller football can be.

He had been plucked from Alphington, where he was captain, to play the final home-and-away game of the 1913 season. It was a brave selection, with the Pies close to a possible finals campaign, and it seems an odd time to have been trialling a newbie.

But Reynolds starred. Playing as a follower/forward he set up the first goal of the game for Charlie Laxton inside the opening two minutes with a clever kick, then had his own first shot on goal a few minutes later. He continued to perform well throughout the rest of the game. One newspaper pronounced him the Magpies’ best player. Another said he “created a first-rate impression”, while The Herald said he “more than satisfied the critics on debut” and would be chosen for the following week’s semi-final against Fitzroy.

And indeed he was. But things didn’t quite go as well in that game. In fact, early in the game he was the subject of derisive jeers from the crowd after he kicked the ball the wrong way. Ouch.

Luckily he recovered his composure and played a good game in a losing side, part of a second ruck division (he was a follower working alongside Doc Seddon and Torchy Laxton, resting in a forward pocket) that some critics felt outplayed their first-choice counterparts.

So began Alfred Pendarves Reynolds’ remarkable Collingwood journey. His mature and commanding performances in those first two games ensured there would be no return to Alphington for him in 1914. Instead he became a mainstay of the Magpie line-up for the next six years. He played mainly as a follower/forward initially, and then later in defence. Blessed with a magnificent physique and superbly fit (he was a top water polo exponent who was still playing competitively into his 40s, at which age he was still described as being “a perfect physical specimen”), Reynolds was a strong, determined and highly capable big man.

The famous Jack Worrall, writing in The Australasian in 1919, summed up Pen’s qualities as a footballer this way:

“Pen Reynolds, who learnt his football at Wesley College, has been one of the good, steady, all-round Collingwood men for years. He can take a turn and hold his own in the ruck and is a fine rearguard man, his long kicking being there of special service. Handy men in a team are valuable to captains, for they can always fill a breach, and Reynolds cannot be misplaced in any position on the field, with the exception of the centre line, where special attributes are necessary. Specialists are necessary in a well-balanced side, but there must also be the handy man, so that a captain may never be at a loss in case of emergency. He is a strong, manly player, more serviceable than brilliant.”

But there were times when he was brilliant, most notably in the 1917 finals, when he produced wonderful performances against first South Melbourne, and then Fitzroy (twice) as the Magpies powered to a Premiership. As The Winner wrote after the South Melbourne game: “Reynolds played in great style — in fact I cannot remember ever having seen him play a better game. His judgment in getting into position was wonderful, and he always seemed to do the right thing when in possession. He was cool, yet smart in all his work, and never failed to get his kick. His was a great exhibition.”

Pen hung up his boots after playing in a second flag in 1919. But his contribution to Collingwood was only just beginning. He started helping out on the training staff soon after he retired, and ended up serving there from 1920 until 1940. He then took over the towel from the legendary Wal Lee and worked as head trainer from 1941 to 1949, at which point he was awarded Life Membership for his 37 years of service.

Pen Reynolds was once described as having a ‘retiring disposition’, and that suited this low-key contributor perfectly. He wasn’t a star, he didn’t grab the headlines, but he did what his coaches and teammates wanted and was a valuable contributor across 87 games, including two Premierships, before spending a further 30-odd years on the training staff. Football careers don’t come much longer, or more valuable, than that.