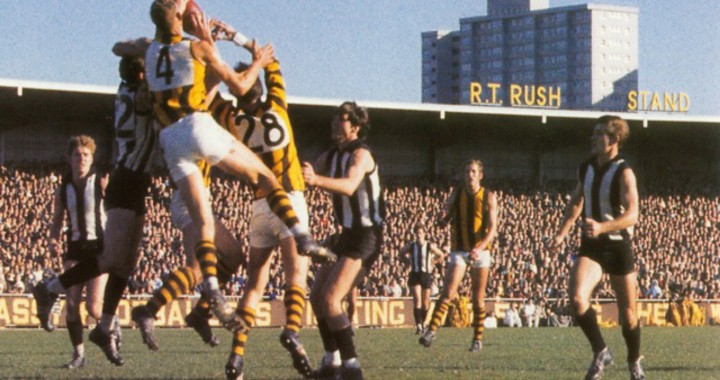 The Rush Stand opened in 1966 and made life much more comfortable for patrons of the outer (Courtesy Getty Images).

Victoria Park was in dire need of an extensive makeover by the 1950s. While the club had achieved significant gains off the field in terms of gaining a liquor licence and the creation of a Social Club, much of its home base had fallen into a state of disrepair and required urgent work to stay ahead of other venues.

Little had been done to make life more comfortable for Victoria Park barrackers since the 1930s. By 1950 the club’s original grandstand — by then, some 58 years old — had become so dilapidated that it had to be pulled down before it collapsed. The 1909 grandstand was faring little better. It had also been condemned and was demolished by the late 1960s.

Victoria Park’s outer facilities were primitive. The club needed to develop the outer area to end the mud heaps which formed there winter after winter. Even the old picket fence around the ground — which was repainted every five years — was falling apart in the early 1950s. Some close to the club said the paint was the only thing keeping the fence upright.

Collingwood had long debated a modernisation program for Victoria Park, but the rhetoric amounted to little. This time, however, it was different. The turning point lay in finally managing to convince the Council to agree to a 40-year lease. This was a major achievement in itself, not just because of the legal wrangling involved, but because it effectively allowed Collingwood to become the first VFL club to be its own ground manager. The club eventually came into possession of Victoria Park on 1 March 1957, and almost immediately set about a major program of upgrades, including construction of the VFL’s first Social Club rooms, two new grandstands and significant improvements to the outer.

First, the club entered the modern age by buying its first tractor to help cut the grass. Previously, that was a job performed with an antiquated horse-drawn mower, something that was so slow it took more than half a day to do the oval. The horse also had to wear special protective shoes so it did not damage the turf. Modern toilet amenities were erected and new entrances added for the outer and grandstand patrons. Various retaining walls and extra terracing were also added to the outer.

The new Social Club rooms, situated on the area of the old tennis courts and press box, were another outstanding success. Despite some initial funding problems which saw John Wren Jr, Joseph Wren, Jack Galbally and Jock McHale Jr each having to personally guarantee £10 000 to help secure an important loan, the rooms were finished before the end of the 1959 season. They were opened at a gala evening on 26 August by no less a figure than the state’s Governor, Sir Dallas Brooks.

It was, from all reports, one of the great nights at Collingwood. The Governor and president Syd Coventry pulled beers from behind the bar, and the Social Club was launched in exceptional style. Then secretary Gordon Carlyon recalled later: ‘At that stage we were the only licensed football club in Victoria, the only club to have unrestricted control and full responsibility of being its own ground manager, and also the only VFL club which had club rooms built and financed from its own sources. It [building the rooms] was a bold and ambitious move in keeping with the great traditions of Collingwood.’

The project provided the club with some outstanding facilities. It was described as ‘the most modern of its type in Victoria . . . designed to incorporate luxury with serviceability, colour with conservatism and durability with practicability’. Even the players were impressed. Ray Gabelich remembers ‘walking around there when the concrete foundations were first poured . . . we were the first club to build a social club. It was great, we were very proud of that’.

The ground floor consisted of several offices, a committee room, a Hall of Fame and an undercover parking area, which was soon replaced. A club publication noted ‘the ground floor is entered through a spacious foyer into the J. F. ‘Jock’ McHale Hall of Fame . . . spacious and well-appointed administrative offices are installed, together with a mechanical heating room, liquor storage, with a cool room and a modern palatial lounge where members and associate members can meet in a most comfortable and congenial manner.’

The first floor provided members with a ‘spacious island-type bar room with a glassed viewing alcove where members can relax in comfort and watch the sporting events on the ground’. There was also a billiards room where members could ‘enjoy competitive games in really sumptuous surroundings’. The second floor consisted of a kitchen, a dining room and dance floor. The club even installed a sixteen-passenger modern lift between the various floors. The social club area could accommodate 800 seated members or standing room for 1500 members.

Just as important from the club’s image point of view was the club’s colours emblazoned on the outside of the Social Club, with the Magpie emblem dominating the external façade. It was a symbol to the community and to visitors about who controlled Victoria Park.

Collingwood then switched its attention to the outer, an area of Victoria Park that had come in for constant criticism. A much-needed new scoreboard was added in 1965, as well as a quarter-time clock. That same year also saw construction begin on the R. T. Rush Stand, a 700-foot long, steel-girded, concrete grandstand, completely terraced and covered by a cantilevered roof. The new grandstand was officially opened at half-time of a game in April 1966. Collingwood won great praise from the VFL and even from its enemies for building its new grandstand for the patrons in the outer.

Less than a week after the opening of the Rush Stand, the committee agreed to fund another grandstand, a modern one to replace the 1909 structure. The old grandstand was demolished and a new debenture system was issued to help fund the new one behind the goals at the railway end. The plans had to be scaled back because of funding concerns, and the Sherrin Stand opened for the members in 1969.

The opening of the Sherrin Stand was the culmination of Collingwood’s extensive development period of the 1950s and 1960s, a period that gave Victoria Park much of the look that many current fans remember. The construction of the Social Club Rooms, the Rush Stand and the Sherrin Stand stamped Victoria Park as one of the most modern venues in the VFL at the end of the 1960s. Sadly, the next 30 years would tell a different story.