Team of the Century 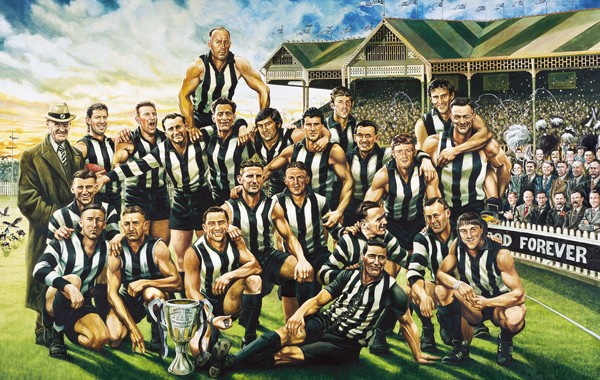 A painting of 'The Team of the Century' by Jamie Cooper.

Collingwood has produced some champion footballers over the years – and none better than the men in the club’s Team of the Century. The Magpies selected the best team in their history, comprising 21 players (with three on the interchange bench in accordance with the AFL’s interchange rules at the time it was named) and coach Jock McHale. Gavin Brown, a 254-game champion of the club, was added in 2002 five years after the league had extended the standard interchange bench to four men.

The Collingwood Team of the Century was named on June 14, 1997, at the Crown Palladium in Melbourne. The selection by a panel of experts comprised club legends Kevin Rose, Ron Richards, Jock McHale Jnr and media experts (and Collingwood supporters) Eddie McGuire and Trevor Grant.

The team features 22 of Australian Football’s greatest ever players. Syd Coventry, who led each of the four premiership teams between 1927 and 1930, was named as captain and Jock McHale was the logical choice as coach.

The team played a total of 4796 matches, and includes seven of Collingwood’s nine Brownlow Medalists. 13 of the 22 selected were club captains, and 16 played in at least one premiership side.

Collingwood Team of the Century Painting

The painting was created by Jamie Cooper, a well-known artist who also painted Collingwood’s 1990 and 2010 Premiership paintings.  Cooper grew up as a Collingwood supporter and also had a career in the VFL, playing 26 games for Fitzroy.

The painting was based on a famous photo of the mighty team of the late 1920’s celebrating after yet another Grand Final win. Not suprisingly quite a few of the players could remain in the painting from the original photo, such was the quality of that era in Magpie history.

In the stands at Victoria Park the past presidents and dignitaries watch on proudly and in the background (left) we see a little payback.