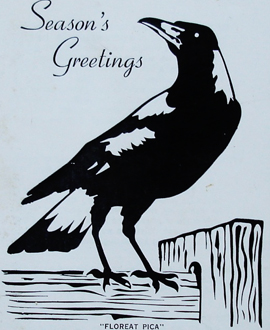 The motto 'Floreat Pica' features on the front of the club's 1974 Christmas card.

The club’s motto, Floreat Pica, was suggested by treasurer and former player Bob Rush in 1910.

Rush had been to an art gallery and had been struck by the word Floreat Etona, the motto of Eton College, in a painting he saw there.

He had some trouble finding a Latin word for Magpie, but scholars assured him, pica, meaning ‘part-coloured’, would suffice.

Rush’s inspired suggestion – ‘May the Magpie prosper’ – remains the club’s motto to this day.