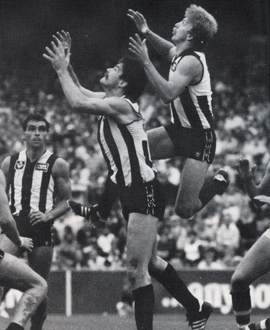 by Glenn McFarlane, of the Herald Sun

COLLINGWOOD had every reason to think it may have unearthed its next star full-forward as the club and its fans consoled themselves over a narrow three-point loss to Sydney in Round 4, 1984.

In a game billed as Billy Picken’s return to Victoria Park in Swans’ colours, the big talking point was the performance of an under-sized forward from what was then considered a football outpost in Queensland.

His name was Dale Woodhall. His seven goals in only his third VFL match that Easter Saturday afternoon represented almost half of his team’s tally for the game.

Wearing a mop of blond hair, standing at 183cm, and decked out in the No.2 jumper, Woodhall turned on a display that had those in the Vic Park outer dreaming of what else they might get from him in the future.

But almost as swiftly as the 23-year-old announced his arrival in the big league, he was gone – one of those one-hit wonders who takes a game by the scruff of the neck and never quite manages to replicate it.

Woodhall would end up playing only 12 games for Collingwood in his one season at the club, kicking 32 goals.

However as brief as his stint at Victoria Park was, he did something that Magpie hall of famers Dick Lee, Gordon Coventry, Ron Todd and Peter McKenna couldn’t manage in their celebrated careers.

Having kicked two goals in each of his first two games, Woodhall’s haul of seven against the Swans came in his third game. Lee took eight games to reach that tally in a match; McKenna kicked his first bag (of 12, mind you!) in his 13th game. Coventry achieved it in his 21st game, while it took Todd 30 games to kick seven or more.

Yet that April afternoon delight became the exception, not the rule for Woodhall. He would kick at least one goal in all but one of his games in black and white, but lost his spot in the team for good late in the season.

A star junior in Queensland, Woodhall’s first senior season with Mayne in the QAFL saw him kick 85 goals, which was second in the competition in 1977. But he won the league’s leading goalkicking award in three of the next five seasons. His form was such that South Melbourne – the team that would become Sydney – signed him in 1978, but Woodhall decided not to make the move to Melbourne.

It wasn’t until 1984 that he chose to take his goalkicking potential to the big league. He had kicked 113 goals and won Mayne’s best and fairest in 1983, giving him confidence he could make it with the Magpies.

He made an immediate impression, kicking 15 goals in his three practices matches, including six goals against North Melbourne at Albury, even if his trip home to Melbourne from that game proved costly.

As Peter Daicos revealed in his book, Collingwood and Me, he and Woodhall paired up in “acey-deucy, a pretty lethal card game … (which) involves getting two cards and betting on the third card splitting the middle” on the bus on the way home. They were competing against Denis Banks, Jim McAlister, Gary Shaw and Mike Richardson, and lost $1000 in the early games.

With the pot next reaching $800, the pair thought could win their way out of their predicament. They were fortunate enough to draw an ace and a king, meaning anything other than another ace or king would see them win the cash. Yet as bad luck would have it, the next card drawn was a king, meaning it was a very costly return trip.

Woodhall’s luck was with him when he played two early games for the Magpies, kicking 2.3 in both games. He showed some form, but not enough to get the fans overly excited.

That all changed in Game 3. He kicked seven of Collingwood’s 15 goals that day.

He scored Collingwood’s only goal in the first term, a snap over his body/shoulder at the Yarra Falls end. Two more came in the second quarter, one of them when he got a break on his opponent Rod Carter, slotting it through to the excitement of the cheer-squad seated in front of the Sherrin Stand.

He added three more in the third as the Magpies cut back an early Swans’ lead, with his fifth overall coming when Mark Beers opted to go long to Tony Shaw, who dished off a handball to Shane Morwood. Woodhall was alone in the goal square and gratefully accepted the easy handball from Morwood.

Some fans even adopted the “Kick it to Woody” expression. Incredibly his seven goals were not enough to get the Magpies over the line. Sydney managed to hold on grimly to the lead at the end of the game.

Lou Richards said Collingwood was lucky to have Woodhall, writing in The Sun: “the rookie full-forward’s seven goals saved further embarrassment for the team and he looked good in the process.”

Woodhall won plenty of attention, and not just from Collingwood fans. In the next game, just four days later, on Anzac Day, Carlton coach David Parkin pitted one of the game’s great defenders Bruce Doull against him. The Magpies won the match by five points, but Woodhall had only one kick – and no goals – before being benched in the second half.

He kicked goals in his next eight games, including four goals against Richmond in Round 18, and three more against Fitzroy the week after. That match against the Lions was Woodhall’s 12th and last VFL match.

He wasn’t selected for the 1984 finals, and his career at Victoria Park was an end.

When Magpies coach John Cahill resigned to head back to South Australia to coach West Adelaide, Woodhall joined him, and he played 62 SANFL games, before heading home to finish his career in the QAFL.