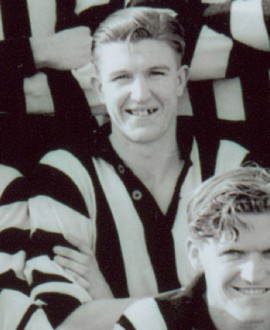 When Allan Brown made his debut for Collingwood in 1945, optimism was finally returning to Victoria Park.

The Second World War would soon be over. So too, thankfully, would one of the Magpies’ bleakest periods on record – the years from 1940-44 had been desperately difficult. But 1945 was the start of that changing, and Allan Brown was a part of it.

Debutants in the opening game of the season against North Melbourne included several who would go on to be giants of the game – Bill Twomey Jnr, Neil Mann, Len Fitzgerald. Des Fothergill was back too. Allan Brown’s career wouldn’t reach the heights of those champions, but his beginning couldn’t be faulted.

He played in the first game of the year and kicked two goals on debut, including the first of the game (his family believes it was with his very first kick). Three weeks later he kicked a bag of four, then a little later again kicked two in successive games. The Pies looked like they had found a forward target, who usually played in the forward pocket and enjoyed runs in the ruck as a second follower. He was tall and, though a wiry rather than solid figure, was strong enough to handle himself well in the aerial duals. He had good hands and was a reliable kick for goal.

But just over a year later his career had ended after only 16 matches, a serious knee injury having finished what looked like a promising journey.

Allan’s daughter, Roben, said the knee injury was “devastating” to him. “Collingwood was everything to him,” she said.

She recalls him talking about playing on Richmond’s Jack Dyer and one of his teammates, Neil Mann, saying to him to watch his back because ‘Jack wants to knock your head off, so just keep running’.

“He just loved the club and even right up until he died on the Queen’s Birthday on the day Collingwood played Melbourne in 2014, he didn’t miss a game on the telly and we would go through the line up every Thursday.”

Allan was brought up in Abbotsford, a Gordon Coventry drop punt away from Victoria Park, and visited the ground with Roben for the final time early in 2014, just a few months before he died, aged 89.

“We took him down to Victoria Park with his frame and we walked around the ground,” she said. “He was saying that when he was playing he was able to look at the Town Hall clock and see how much longer the game was going to go for. We were saying that with how things have been built up that you can no longer see the Town Hall from the ground.

“He thought it was great with what has happened to the ground in terms of it being accessible to people nowadays.”