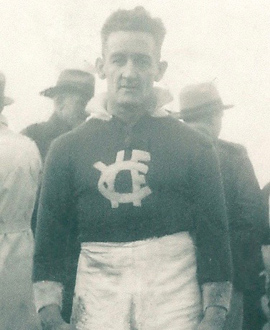 In 1925 Collingwood invited a young local rover down for a training run. His name was Tommy Downs.

But Tommy slipped through the Magpie net and ended up at – of all places – Carlton, where he would go on to become a more than handy footballer who achieved infamy for missing more games through suspension than the 50-plus he eventually played.

But having missed out on one Downs boy, Collingwood wasn’t about to make the same mistake with one of Tommy’s younger brothers, Albert (Bert). It just took the Pies a long time to make the move.

Bert had grown up in Northcote and was good enough as a 2o-year-old to play with Tommy with Northcote in the VFA in 1926, and then the odd game with Preston in 1927. The next three years of his career are a bit of a mystery, though he seems to have turned out for Greensborough in 1928. He joined Collingwood Districts (our reserves) in 1931. He tried again with Preston in 1932 but after failing to make headway there was cleared back to Collingwood midway through that season, playing a further 10 games with the seconds to add to the dozen he’d played in his first year.

After some encouraging performances in the intraclub practice matches before the 1933 season (after one of which The Herald described him as “a nippy rover with his brother’s determination”), Bert was elevated into the seniors for the opening game of the 1933 season.

It was quite the elevation and quite the shock selection – especially given Bert was already 27 years old (he still ranks as one of the 20 oldest players to have made their VFL/AFL debut for the Magpies).

He lined up in a forward pocket alongside Gordon Coventry – one of four Magpie newcomers that day – and did OK. The Sporting Globe said he “performed very creditably in his first game”, while The Herald described his showing as “creditable”.

In many ways Bert was a carbon copy of his older brother. He was very small, even for a rover, quick and super hard-at-it. He loved a goal, too. Both the brothers were feisty, and loved a stoush. But Bert was also a natural leader, and seemed to take it upon himself to try to inspire the teams he played with. This was particularly true when he moved into country football.

Remarkably, that happened sooner than anyone foresaw. Bert’s VFL career ended as quickly as it had begun, dropped after just that single game. He played a couple more games with the seconds, but in the middle of the year was cleared to Kyneton. He captain-coached Kyneton to a Premiership in 1936, then went to Fish Creek in 1938 (where he would meet his future wife) and then the next year headed to the Yallourn Blues, where he led them to a flag in his very first season as captain-coach.

Bert went on to be something of a legend in the Latrobe Valley. He became a shift foreman at the Yallourn Stores (for the old State Electricity Commission) and remained working with the SEC for many years. He continued coaching the Blues after the Second World War and was a highly respected leader. His family says he didn’t talk much about his football career, even his time at the top.

That was, of course, as fleeting as they come. But Bert Downs was lucky in one way: a jigsaw puzzle was made of the Collingwood team in 1933, for which they used a photo from that opening game. So even though he only played one game, Bert was immortalised in jigsaw form, standing alongside the Coventrys and Colliers. For a one-gamer, that’s a decent claim to fame.