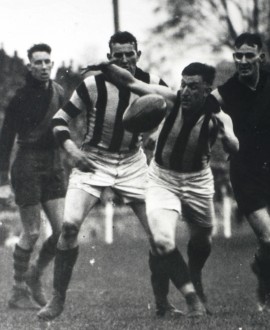 Coaches often like to remind their charges that persistence pays. And rarely can that adage have proved truer than in the case of Bert Lauder.

Having been knocked back by three clubs before joining Collingwood, Lauder was 27 when he made his VFL debut. Two years later he’d managed only two further games. But when star running defender Ernie Wilson was injured during the 1928 season, then retired soon after, Lauder was ready to take his chance – and three Premiership medals were his reward.

Albert Victor Lauder was born in 1898, but spent most of his adult life known universally as ‘Harry’ after a popular Scottish singer/comedian of the time. He came from Maryborough, but didn’t play football until he moved to Melbourne. He worked in the public service as an inspector of fisheries and game, and it was with the public service team that played in the sub-districts league that he first came under notice. He trained with Hawthorn, Richmond and Carlton to no avail, before joining Collingwood after playing in a Premiership with the public service team in 1925.

At Collingwood he found opportunities limited, playing just one game in 1926 and one more in 1927. In 1928 he found himself at the centre of a storm while playing for the reserves. He was involved in an incident with a Geelong player named Waugh, which resulted in Waugh being carted off with an ankle injury. Metropolitan newspapers reported that the game thereafter turned into a “disgraceful exhibition”, with “an abundance of kicking with ankles and shins as targets and fists and elbows were swung.” Those same papers said that Harry had been subsequently pelted with insults and – much worse – stones by angry fans. But the Geelong Advertiser reported that the Melbourne press had greatly sensationalised the roughness of the game, and quoted two Geelong players as saying that the initial incident had definitely been an accident.

Later that season, when Wilson did his knee, Lauder was ready. He was a similar player to Wilson, both in build and style of play – tough, hard-running and straight at the ball. Around 188cm in height, he was strongly built, with massive hands and big shoulders and chest. It was this strength, combined with his dash and determination, that made his charges from the back pocket or half-back so effective. He was a strong kick and a player who always gave whole-hearted effort.

Lauder still played only three games in 1928, but one of them was the Grand Final win over Richmond. In 1929, with Wilson gone, he cemented his spot with 15 games – and another Premiership. (Incredibly, the shock semi-final defeat by Richmond that year was the first defeat he’d tasted at Collingwood, after 18 games.) ‘Harry’ backed up again with another key role in the 1930 flag – giving him three Premiership medals from just 30-odd games, and already at the ripe old footballing age of 32. He played three of the first four games in 1931 but retired soon after and spent the rest of the year with the seconds. A strained knee in the semi-final against Melbourne signalled the end of his career.

Lauder was of Scottish descent himself and enjoyed the link that his nickname provided. He was also an expert bagpipes player and for many years was secretary of the Melbourne Pipe Band. All of which contributed to this supporters’ ditty about him in 1930:

When supporters are ceasing to boast
Of victories not made to order,
The thing the Magpies like the most
Is a jig by their own Harry Lauder.