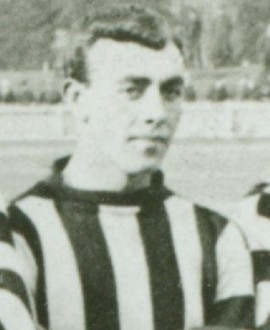 Alex Dunstan only played 10 matches with Collingwood – all in the 1908 season – but he did something very few Magpie footballers have ever done.

He booted the winning goal in a game.

It was Round 14, 1908, and the Magpies were finishing strongly against Essendon at Victoria Park. Playing forward, Dunstan kicked his second goal of the game – and the most important for the day – to edge the Magpies in front and they were able to hold on to win by four points.

The Argus detailed: “Dunstan’s goal did the trick for the home side as no further scoring was done at either end, and they remained to the bell four points to the good.”

Dunstan’s two goals that day were the only two he would kick in his 10 matches for the club, but the last one had tipped the scales in Collingwood’s favour.

He had been born in Fitzroy on July 14, 1885, and his parents would honour the suburb in which he was born by naming him Alexander Fitzroy Dunstan.

He was recruited to Collingwood from Warragul, and impressed in the early trial games, doing enough to be selected for the Round 1 clash with Geelong, at Corio Oval. It was a tough initiation as the home side won by 47 points.

There were five debutants that day for the Magpies, with the most high-profile one in the future being Les ‘Flapper’ Hughes. Not many people took much notice of Dunstan – although he did kick a behind – but he was overlooked the following week.

He was back in the team again for the Round 3 game against University, and would hold his place in the team for most of the season.

In his third game, against Carlton, it was said Dunstan was “amongst the new men (he) shows great promise.”

In a game later that year he was described as a player of “sterling worth”. Yet of his ten games in black and white, Dunstan would play in only four winning matches, but he could not regain his spot in the senior team when he stayed on the list for the 1909 season. Midway through that season, he crossed to Brunswick – the VFA Magpies – and made an impression almost immediately.

The Argus said: “Brunswick have gained two useful men in Dunstan from Collingwood and Ingleman from Carlton.” He stayed with the VFA Magpies until at least the end of the 1910 season.

A month before his 31st birthday, on June 14, 1916, Dunstan enlisted as part of the 6th Reinforcements of the 54th Battalion when he was stayed at the Royal Hotel, in Parkes, New South Wales. It is not known why he was in the town on that occasion, whether he was working as a painter (his profession) or whether he hoped to enlist far away from his home base.

Dunstan sailed from Australia on the Ceramic on October 7, 1916, and served in France before being sent home due to a bronchial condition in April 1918. He was discharged before the end of the war.