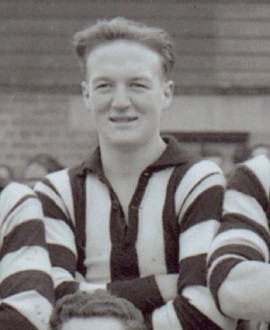 Look at Allan Knorr, for example. His stats tell you he played nine games in 1946: you would probably think he’d been a one-season wonder who tried his luck at Collingwood but didn’t make it and was let go after one year.

But the real story is something else again. It shows three further years of injuries and frustration on the player’s part, and thwarted hopes and patience from the club’s perspective.

Allan Francis Knorr was born in 1927, just over a week before Collingwood beat Richmond for the first of their fabled four-in-a-row Premierships. He grew up in Ivanhoe and barracked for the Pies, starting at Ivanhoe State School and finishing at Collingwood Tech. He played local footy with Ivanhoe Amateurs, and in 1945, the year he turned 18, won that club’s Joe Holland Trophy for the best footballer of the year.

Not surprisingly, that led the Magpies to ask him down to trial for the 1946 season. He did well in the practice matches, with The Argus describing him as “a fine mark and dashing type” and The Herald rating his marking as “superb”.

He was tall for the time, standing around 185cm, and played mostly in key positions at either centre half-back or centre half-forward, or else in the back pocket. His greatest strength was his strong marking, but he was also fast enough to be a danger running out of defence.

Allan was initially named on the supplementary list for the season but he settled in to reserves football quickly and starred against Richmond in the fifth round, prompting The Age to speculate that senior selection “might not be far off”. And they were right: he was named at centre half-forward against Footscray the very next week. Afterwards, The Argus would note: “Knorr, Collingwood’s tall centre half-forward, showed great promise in his first game, marking really well.” The Sporting Globe agreed: “Knorr, tall and rangy, was impressive. He took some nicely judged marks, working himself well into position, and kicked well. He looks a good prospect.”

That began a stretch in which Allan played seven of eight games, with positional shifts into defence and even the ruck. It looked like his season might be over when he injured his foot against Fitzroy in Round 13, but he returned late in the season. It speaks volumes for the impression he had made that, following a grand showing for the reserves in a semi-final against Melbourne, the selectors brought him back into the senior side for the drawn second semi-final against Essendon, and the replay the following week (where he drew attention as the only Magpie to wear a sleeveless jumper).

Even though he missed the preliminary final defeat to Melbourne the following week, it had been a hugely promising first season. Nine games – it would have been more but for injury – and still had only just turned 19. The Magpies thought they had found a good big man.

But the rest of Allan’s football story was filled with frustration, littered with injuries and aborted comebacks. He was touted as one of the potential big improvers in 1947, but he fractured a bone in his ankle early in 1947 while playing with the seconds and could manage only three reserves game for the year. He then missed the entire 1948 season with serious knee injuries to both legs. In 1949 it looked like he might be making a comeback, but he fractured his arm early in the season, was then plagued with thigh and leg injuries and ended up playing only five reserves games for the season. That meant the last three years of his career had produced only eight reserves games in total, and he finished his time at Victoria Park playing at centre half-forward in the 1949 reserves semi-final against Richmond.

And that, surprisingly, was it for his football career. He neither played nor coached after he left Collingwood. Allan worked in the family grocery store in Upper Heidelberg Rd, Ivanhoe. He had started working in the store when he was 14, and after the knee injuries in ’48 his father gave him an ultimatum that it was either football or work: he told Allan that if he hurt his knees again he would be no good working in the grocery store.

So Allan threw himself into his work, and family. But whether making deliveries or working at the store, people always stopped to talk to him about football in general, and Collingwood in particular. And he continued to be involved in footy, spending many years as a goal umpire. His love for the Pies filtered down the generations too: his daughter Robyn and her younger brother Stephen both became members of the Cheer Squad in the 1960s. Stephen used to design some of the banners, while Robyn served as secretary for some years in the 1970s.

Allan kept in touch with one-time teammates like Bill Twomey and Neil Mann after his football days finished, but didn’t talk a lot about his time in the VFL. Instead he resumed playing tennis, winning a few trophies along the way, and together with his wife Betty successfully bred Dachshunds (one of whom was a Royal Show Champion). He was also a keen fisherman later in life.

In the end, nine senior games in four seasons doesn’t sound like a fair return for a player of such apparent promise. But if he’d had even a reasonable amount of luck with injuries, it’s almost certain that Allan Knorr would have played many more than that.