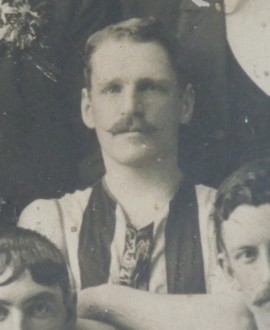 In a club that is famous for its great forwards, Archie Smith is the champion forward that few Magpie fans have heard about.

That is purely because he played in the club’s earliest days – from its very first game in 1892. But his record stands comparison with any of the other great Collingwood spearheads, if not in total goals scored then at least in accolades achieved.

He topped the club’s goalkicking seven times (once jointly) – the same as Peter McKenna and Sav Rocca, and behind only Gordon Coventry (16) and Dick Lee (10). He also topped the VFL goalkicking in 1898, and finished in the top five on five other occasions. And if his career goals tally seems small when compared to the others, you need to remember how scarce goals were back in the 1890s: teams regularly managed to score less than a handful of goals per game.

In that context, Archie Smith was one of the greatest goalkickers – and players – of his era. He is our VFA games and goals record-holder, with 87 games and 86 goals between 1892-96. Add those to his VFL-era record and he has a combined total of 176 games and 205 goals for Collingwood. To have clocked up so many games, and averaged more than a goal each outing, in that era is remarkable.

Archie – better known as ‘Snapper’ – came to Victoria Park from Richmond in time for Collingwood’s debut season in 1892. He played in the first game against Carlton, named in a forward pocket, and was a permanent fixture from then on. He was durable (despite a bandy-legged gait), rarely missing games other than through suspension, and immediately established himself as one of the most consistent and dangerous forwards in the game.

He was actually a good all-round player – aggressive and hard-working, neatly-skilled, good at passing, agile and team-focused. During the 1893 season he was often thrown onto the ball or into defence, and The Herald noted his success in different positions. “Smith played back, forward and followed for the Magpies and plainly showed that he is a good all-round man,” the paper said. “Kicked two goals when forward.”

But as useful as he could be around the ground, it was closer to goals where he posed the biggest threat. And by 1894 that threat became real: three times that season he bagged three goals in a game, after one of which he was carried shoulder-high from the field. Then in the last game of the year against Carlton he bagged a phenomenal SIX (the club still has the ball used in that game) – a staggering effort.

The bottom line is he was just great at goalkicking, with tight angled shots a particular specialty: he won a goalkicking competition in 1895 against some of his VFA contemporaries with five goals from six attempts.

“Smith was fast, cool and clever forward, and his dextrous passing did much to secure the win,” wrote The Australasian in 1894. “He is a very hard man to dispose of, and as busy as a bee. Smith would be invaluable in any team for he not only kicks goals but works like a tiger, and is never beaten. [There is] no more determined or aggressive little battler in any team. He is every inch a footballer, and who possesses the heart of a lion.”

“Little Smithy played for all he was worth, and came in for a big share of congratulations for his sturdy work and point-getting,” wrote The Mercury a few years later. “He is a genuine grafter, never missing a show, and excelling in his lightning snapshots. It was a treat to watch him when the ball came his way. As nimble as a chicken, Archie invariably dodged his opponents and had his kick, proving he is the right man in the right place.”

Archie finished third in the competition goalkicking in 1894 with 25 goals, then second the next season with 27, after which most newspapers nominated him among the best forwards in the competition. The next two seasons were a little quieter – only 12 goals in 1896 and 15 in 1897 – but he bounced back to become the first Magpie to win the VFL goalkicking in 1898, with a total of 31 goals. “Smithie, like a cat on hot bricks, was here, there, and everywhere, trying his snap shots from every angle on the ground,” was a typical comment from The Mercury that year.

Archie Smith shoots for goal against Geelong in 1901

Then, to everyone’s surprise, he retired. The club’s Annual Report said the loss of the ‘model clubman’ would be severely felt, both on the field and at committee level, where he had also served. At the AGM early in 1899 president William Beazley presented him with what was described as “a substantial memento of esteem” (a purse of sovereigns).

But three weeks into the season, and after much badgering from the club, he reappeared!  “Mr. Smith would, doubtless, personally desire to rest on his laurels,” the club noted later, “but it is in a spirit of loyalty that he has again donned the black and white. Such unselfishness is to be highly commended, and should serve as an object lesson to those players who seek personal ends rather than the prestige of their clubs.”

‘Snapper’ simply took up where he left off, playing consistently good football. He did so right up until his penultimate season of 1901, when he kicked 30 goals and finished fourth in the VFL goalkicking table. He played a few more games in 1902 and then hung up the boots for good.

Archie Smith remained a presence around the club until he died in the early 1960s, a lasting reminder of the club’s earliest days. Even then, it’s likely his achievements were underrated, although not by anyone who had seen him play. He was a true champion of the Collingwood Football Club – and our first truly great forward.