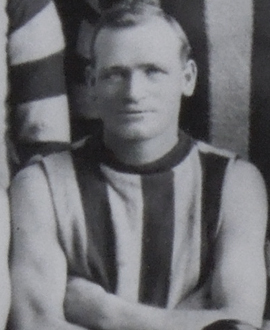 Artie Dillon’s time in the Collingwood senior team was fleeting and produced only two games; hardly the sort of experience that constituted meritorious service.

But few people following the club at the time would have known about the distinction he had won three years earlier – far from the football fields, and far from his home city of Adelaide – which saw him awarded a Meritorious Service Medal during the madness of World War One.

Dillon initially enlisted in January 1915, but was discharged within six weeks and stamped with the remarks “not likely to become an efficient soldier.”

How wrong that assessment would become.

The rising 21-year-old labourer would join up again later that year, listing his mother (Elizabeth Dillon) as his next of kin, from her residence in Southwark, SA. His father, Mr W.J. Dillon, had been a councillor at Thebarton, as well as the president of the local branch of the United Labor Party, but never lived to see three of his sons go off to war.

Artie was a private in the 32nd Battalion when he sailed for the war in late 1915, though he would later transfer to the Pioneers Battalion.

He met up with two of his siblings in an emotional reunion in Egypt the following year – a moment none of them would ever forget. They had themselves weighed for the occasion to see if army life had brought about any physical changes, took in some of the ancient sites, and captured the event with a family portrait they would send home to their mother.

The youngest of the trio, Perc, who would later win a Military Medal, stands behind his seated brothers with his palms placed on their shoulders. Each of the young men has a steely-eyed determined look.

The Daily Herald used the photo and noted: “The boys are fond of sport and are all well known in the Southwark district, in which they were all born.”

Artie wasn’t always a model soldier, but who was in the maelstrom of battle in France, and who wasn’t inclined to go absent without leave on occasions.

But when the battle was raging, he was an exceptionally brave soldier, capable of taking risks that few would even consider taking.

That courage under fire, and ability to deal with the stress of a heavy attack, saw Artie initially recommended for a Military Medal, which would soon become a Meritorious Service Medal.

The citation explained his support of those around him: “On the 19th October, 1917, east of Westhoek, Lance Corporal Dillon was with a party building a plank road to a Battery position, which was continually subject to heavy shell fire. Lance Corporal Dillon showed great courage and devotion to duty by doing all the most forward and dangerous work himself, although on two occasions the whole party had to retire from the position altogether. His splendid example was undoubtedly instrumental in carrying the work through.

“Again, on the 2nd December, 1917, east of Wytschaete, Lance Corporal Dillon displayed great courage and tact in handling his Section, which was subjected to a sudden burst of heavy shell fire. Lance Corporal Dillon has shown a most cheerful demeanour throughout the most trying conditions and his fine example has stood out on many occasions.”

Following the war, Dillon sailed back to South Australia, arriving there in May 1919, with the Adelaide Advertiser acknowledging his return, and noting the distinction that he had won on the battlefield.

Having played for a West Torrens ‘B’ side before the war, Dillon wanted to play football again. But it would be across the border in Victoria – and in the Collingwood heartland – where he would resume.

History doesn’t record what brought him to Melbourne – and Victoria Park – just a month after his repatriation. But he played his first game with the Collingwood District side in July 1919 and went on to kick three goals in the club’s District grand final win later that season.

It seemed the perfect audition for elevation to the senior team in 1920, though the move into the VFL meant he had to get a permit to play for the Magpies in 1920.

It is not known whether Dillon was one of two recruits who either failed to front – or was late – to the Magpies’ first game of the 1920 season against Essendon, which prompted retired coach and a more portly Jock McHale to make a comeback for his 261st and final game in black and white.

The Argus detailed: “Collingwood was the only team without a recruit, though that perhaps was an accident, for two new players were late, and at the last moment the committee had to press two veterans into service.” It added: “the explanation seemed to be that some of the recruits, annoyed at being given so little opportunity in the trial games, either stayed away or turned up too late to be of any use.”

Dillon made his VFL debut the following week against Geelong, all the way down at Corio Oval.

Playing in the back pocket, he came to notice with a solid performance, on the same day that another recruit from interstate, Western Australia’s Charlie Tyson (later a Collingwood captain) made his debut.

But even without the likes of McHale (who went straight back into retirement), Les Hughes and Gus Dobrigh, the young Magpies bravely held on against Geelong, with Dillon noteworthy for his “solid play” where it was noted that “time and time again he staved off Geelong’s attack.”

It was enough for Dillon to retain his position for the Round 3 game against Melbourne, which produced another win. But that was the end of his representation in the Magpies’ seniors, and he reverted back to the District side for the rest of the season where he returned to the forward line and continued to kick goals, including a bag of six late in the year against Leopold.

After spending some time in the VFA, Dillon eventually returned home to South Australia. And it was there, in Adelaide, that Dillon died at the relatively young age of 53, on January 10, 1948. He left behind a wife and three children, with one death notice noting that he was “peacefully sleeping.”