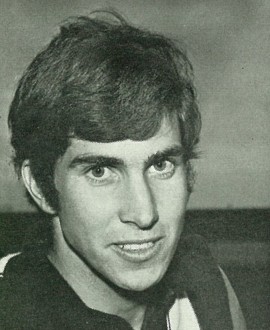 First nights at training at a new club are never easy – but none have been tougher than that which Barry Mugeli endured on his first night at Collingwood in 1965.

Barry was a champion schoolboy athlete from Corryong (his dad ran a hotel/motel there), and his sporting performances in the district brought him to Collingwood’s notice. He was invited to train with our reserves and under-19s in May of 1965 (he had just turned 17) but towards the end of that first run was involved in a fearful collision with another player.

He was rushed to hospital in a serious condition, and doctors had to perform emergency bowel surgery. He was pretty sick and sorry afterwards, and returned home to Corryong with strict orders to rest and recuperate.

But the Magpies had seen enough even in that first truncated training session to know that Barry was a footballing talent. So they kept tabs on him as he began to recover, first by playing golf (where he won a B grade championship with his local club) and then as he progressed back to athletics, where he won a string of events at Corryong High School. Before long he was back playing cricket, and competing in Country Week cricket championships.

Eventually he returned to football, too. And it seemed he’d lost little of the talent that had brought him to Collingwood’s attention in the first place. So in 1968 he returned to Victoria Park, being welcomed back with special mentions in the club’s newsletters and practice match reports. He did well, too, but wasn’t able to get a spot on the senior list. Nevertheless he persisted, put in a string of good performances in the reserves and his comeback was complete when he was named in the seniors for the round 16 game against Hawthorn at Glenferrie Oval (the game in which Hawks full-forward Peter Hudson would kick his 100thgoal for the season).

Mugeli was a fine build for a footballer, standing around 180cm tall and weighing around 80kg. The wing was his best position in the VFL, where his natural speed and running ability could be used to best advantage. He was also a highly skilled player, again suited to the open spaces on the wings.

He gained only nine possessions on debut from a wing, but fared better in his second game with 14 in a team that was beaten badly. Still, he was demoted to the bench for his third game and did not get on the ground. After that he went back to the seconds – and unfortunately, that’s where he stayed. Despite continued good form he played only 16 games of reserves football during 1969 before being released.

Barry Mugeli ended up playing just three senior games in his two seasons at Collingwood. How he might have developed if he’d got through that first training session unscathed is anyone’s guess. But given what happened, just to make it to VFL football at all was a personal triumph – and a small reward for great courage and persistence.