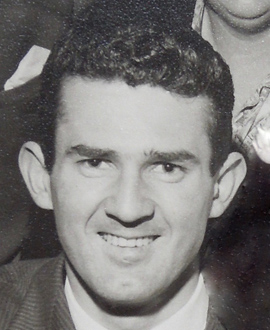 At the end of the 1961 footy season, Barry Perry seemed to be on the verge of making his mark.

He was a seriously talented sportsman who had grown up in and around Collingwood, where he at times played street cricket with a kid called Keith Stackpole, who would later go on to open the batting for Australia.

Perry was a natural sportsman. As a footballer he was one of those elegant players who made the game look easy. He would float in and out of the play, always balanced, taking a lovely mark here and kicking a classy goal there. He stood just under 6ft in the old language but looked smaller on the field because of his light frame. He played mostly on the half-forward flank or in the centre, both places where his skills could shine.

He first played with the Collingwood under-19s in 1958, having come from University High School Old Boys. After 16 games there he graduated to the reserves in 1960, where he kicked 46 goals in 34 games spread over two years, winning the goalkicking in both seasons. Late in the 1961 season, as the Pies tried to make the most out of a disappointing year, he was rewarded for two years of solid form with his first two senior games. The second of those came in the final game of the year, a dramatic tie with Essendon at Windy Hill where he kicked a goal and teamed up nicely with Murray Weideman at centre half-forward.

He hadn’t taken the game by storm but had done enough to suggest a big career lay ahead.

And so it did – just not in football.

Barry’s younger brother Alan died in a motorcycle accident around that time. The accident happened near home, and Barry was one of the first on the scene. Not surprisingly, that seems to have prompted a shift in focus. Friends say Barry changed from a happy-go-lucky kind of guy to one who took life – and his studies – much more seriously.

He left Collingwood and briefly trialled with Fitzroy, before playing a few games with Preston. But football soon took a back seat.

He was already working in the Crown Solicitor’s Office, but then decided to take on further legal studies. This eventually led to an honours degree at Monash and a doctorate in jurisprudence from Stanford University in California. He began working in the Victorian Ombudsman’s office in 1974, shortly after the creation of the role. He ended up serving as Victoria’s Ombudsman from 1994 until he suffered a severe stroke while on his rural property in central Victoria on Anzac Day 2003. The stroke forced his retirement, though it would be another 10 years before he succumbed to the after-effects.

But Barry Perry never stopped loving Collingwood. Indeed he would much rather have talked about his beloved Pies than any of his remarkable career achievements. He served the Victorian Parliament and its people faithfully and well – but he remained at heart a kid from the streets of Collingwood whose proudest moment was pulling on the black and white No. 38 jumper for those two senior games back in 1961.