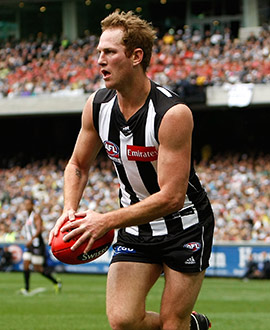 The former St Marys and Preston Knights player started the 2000 season in the senior line-up but, like many youngsters, found the going tough mid-season.

He appeared best suited to a midfield role and had plenty of junior experience across half-back where his strong work ethic and ability to win plenty of the ball were great assets.

He played the first 14 games in 2001, but a two week suspension derailed his season and he spent the majority of the closing stages in the VFL.

In 2002 he improved dramatically and his pressure on opposing small forwards made him a permanent part of the defence. He still made the odd mistake, but his determination more than compensated for it.

He progressed even further in 2003 when he became more of an attacking force.

He played in the 2002 and 2003 Grand Finals and in 2004 had his best year to date as primarily a defender whose running talents and ball-collecting skills were great assets to the side. It resulted in him running second in the best and fairest.

He started well the following year, but a thigh injury threw his season off the rails and he finished up in the reserves side.

He returned to form in 2006 and the only blemish on a good season was an over-inflated press coverage of a late-night drinking incident.

He was in good touch in 2007 until copping a six week suspension for a high hit on Melbourne’s Daniel Bell, and then had an uninspiring 2008 campaign.

Johnson had changed his lifestyle considerably – eating better and drinking less alcohol – when his career was on the line and he had been put forward as a possible trade. He was rewarded with a premiership medal in 2010.

He was an excellent performer in the 2011 Grand Final loss, but missed much of 2012 due to a shoulder reconstruction.

He began 2013 in the senior side but injured a calf in the third round and retired late in the season, before going on to work in administration at the club.