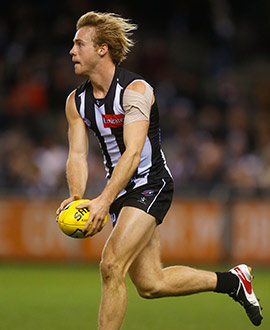 Across eight years on Collingwood’s books, Sinclair constantly belied his slim build to be an inspiration to teammates with his attack on the ball and the ball carrier.

He possessed genuine pace, desperation and a willingness to compete, qualities which made him a valuable option at both ends of the ground.

The former Oakleigh Charger made his name as a small forward in 2012 but found himself playing in a lock-down role at the other end of the ground the following year.

It was as a defender that Sinclair eventually carved his niche, albeit during several years blighted by hamstring strains and concussion.

His soft tissue concerns, in particular, punched holes in his 2014 and 2015 campaigns, before he managed 13 senior games of arguably career-best form in the back pocket during 2016.

At his best, Sinclair was shutting down opposition forwards and providing important rebound from defence. He recorded a career-high 27 disposals against Port Adelaide in round 11 and was among his side’s best in wins over Carlton and Greater Western Sydney later in the year.

Sadly, he could never quite manage the clear run he and his coaches yearned for. Four separate bouts of concussion forced him into the grandstands, the last of which ended his season against North Melbourne in round 18.

A particularly nasty hamstring strain during the first pre-season match of 2017 saw him sent for surgery before his year had barely begun. Sadly, that night against Essendon was the last Collingwood would see of Sinclair, who was forced to announce his retirement at year’s end.