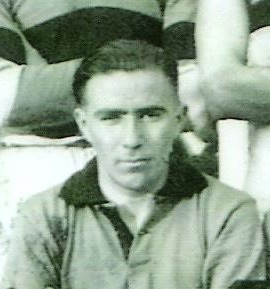 Originally from Braybrook, Le Sueur was a fast and flashy wingman who spent just one season with the Pies, having previously played 18 games with Footscray between 1937 and 1939.

His Footscray career got off to an uncertain start when, having been named to play with the seniors against Fitzroy in 1937, he had to withdraw after his work refused to grant him time off! He had more luck in future weeks, however, and made quite an impression in his debut season.

A mystery stomach/appendix illness kept him out of senior action in 1938, but he returned to the Dogs in 1939 before crossing to the Pies in 1940. He debuted against St Kilda in Round 7, the first of the three successive games he managed in the black-and-white jumper. After the second of those, against Richmond, the Sporting Globe noticed his performances:

“Le Sueur has tremendous pace, and must be one of the fastest men in the game. As at St. Kilda in his first game with the Magpies, Le Sueur was comparatively quiet in the first half, but when the pressure was on after the interval against Richmond he did really well.”
Not well enough, it seems, to have kept his place. Le Sueur was dropped after the Round 9 meeting with Footscray, and that game against his old club proved to be his last in League football. He was cleared to Williamstown in 1941, and would later be a part of that club’s 1945 premiership side. He also returned to his old club, Braybrook (where he acted as secretary) when the VFA went into recess during the Second World War.