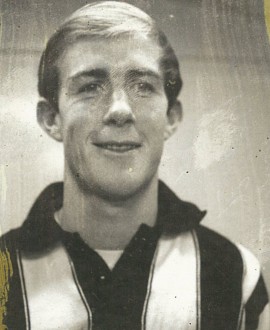 The 1968 pre-season Collingwood newsletter could hardly have been more optimistic. “Collingwood’s problem at centre half-back appears to be well on the way to being solved,” it trumpeted, “after a fine game from Bernie Brady. The strong marking and tearaway style of this player stamped him as a strong contender for this vital position in the opening match against Richmond.”

Brady had been opposed to Peter McKenna that day. And while McKenna kicked three goals, Brady was voted best afield. The week before he’d been played in the ruck, where he had “rucked strongly and impressed with his pace and good marking.”

All the signs pointed to Bernie Brady’s VFL career starting that year. And so it did – just later than most thought and more briefly than anyone had hoped.

The younger brother of North Melbourne’s 1950s star John Brady, Bernie was born in Wangaratta and went to the St Patrick’s Primary School before moving on to Champagnat College. He was a sporting star at school, and played in a flag in 1963 with the Wangaratta Junior Magpies – surely a portent of things to come. He left school early and went to Albury to start a wool-classer’s course. While there he played reserves footy while Murray Weideman was senior coach.

The next step in that education saw him come to Melbourne, and Collingwood saw potential. He was raw but was blessed with a lovely, athletic build and stood around 193cm tall. Despite his height he was also extremely mobile, and the Magpies thought there was plenty to work with.

He started with the under-19s in 1965, playing 11 games, kicking six goals and being part of the thirds’ Premiership team. He split his time between thirds and seconds in 1966 (he was one of the team’s best against Richmond in the reserves grand final) and spent all of ’67 with the seconds.

By the time Bernie hit the practice matches of 1968, his lengthy apprenticeship (he would end up with 18 under-19 games and 30 in the reserves) seemed to have worked. But despite his red-hot pre-season form in the ruck and at centre half-back, he wasn’t chosen to make his debut until Round 9 against South Melbourne at the Lake Oval. He started on the bench that day and came on at three quarter time to replace Terry Waters. But he twisted an ankle himself in that last term and had to come off.

That was his one and only taste of senior football, and he was released at the end of the season. Years later he would tell journalist Kevin Hill that he “always regarded myself as just a plodder”. But it’s also worth pointing out that he was behind some pretty handy big men at the time, including Len Thompson, Graeme Jenkin, Terry Waters, Ernie Hug, Vaughan Ellis and so on.

After he left Collingwood, Bernie started up a trucking/transport business that would go on to become one of the biggest players in the industry before being swallowed up by TNT in 1995. He played some footy in Queensland along the way, but wasn’t seriously involved again.

Bernie Brady spent four years at Collingwood for a senior career that amounted to less than 30 minutes of on-field time. What most of us wouldn’t give for even that.

– Michael Roberts. With thanks to Kevin Hill. https://kbonreflection.wordpress.com