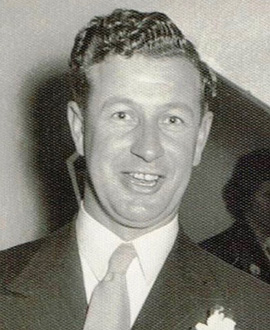 Bill Duckworth grew up dreaming of playing for Richmond.

He attended his first match as a three-week-old baby in 1918, when the Tigers were known as the ‘Wasps’.

His father worked in the bar at the Punt Rd. ground, and his grandfather was a life member of the Richmond Cricket Club. One of his favourite players as a teenager was Jack Dyer – and he recalled: “Did he hit them when they weren’t looking!”

But Duckworth’s family residence and the fact the Richmond coach of the time, Percy Bentley, was a stickler for the rules, meant the promising young footballer was forced to try his luck with Collingwood – of all clubs – during the 1940s.

Duckworth said in 2014: “I went down to training and the coach said to me, ‘Where do you live, son?’ I said, ‘Northcote’, and he said ‘Sorry, but you can’t play here. You have to go to Collingwood.”

The fact that Duckworth’s family had moved from Richmond to Northcote in the early 1930s meant he was residentially tied to the Magpies – a team that had long been bitter neighbourhood rivals of his beloved Tigers.

“I didn’t have any choice; I had to go to Collingwood,” he said. “But it all worked out all right.”

Duckworth had been a talented young player with Parkside in the Victorian Amateur Football Association, but he was delighted to find that you got paid to play in the Collingwood’s seniors.

He managed that – twice – during the Second World War in one of the toughest periods in Collingwood’s history. And the 183cm centre-half-forward also managed to kick a goal in each of his two senior games.

Ask him what he recalled of his two matches in black and white – one in 1943; the other in 1944 – and Duckworth said the mists of time had taken away much of his recollection from those matches.

But he did remember the excitement of playing at centre-half forward.

And bring up the goals and his eye begin to sparkle – “You always remember the best, they were right in front and I was able to kick them.”

“I tried to be a good kick and used to practise it at training.”

Duckworth initially played in the Collingwood seconds under Bervin Woods, but came under the tutelage of the legendary coach Jock McHale when he had his time in the seniors.

McHale was then in his early sixties, and had been coaching the Magpies for just over 30 years.

“He was a pretty old man then,” Duckworth said. “He wasn’t a bad bloke, but he didn’t want to you know you sometimes. He would just say ‘Do this’ or ‘Do that’, and you would do it.”

That was Melbourne’s home ground during the Second World War while the MCG had been seconded for military purposes.

“(That day) I went in and the bloke on the gate said to me ‘Are you in (the side) today? I told him I was. I went and saw my dad behind the bar and all he said to me was: ‘Be careful’.”

Melbourne won by 12 points in a close encounter on a day in which Duckworth played alongside Lou Richards, who was named at half-forward. Richards’ uncle, Alby Pannam, kicked seven goals in the game.

“They were both pretty cheeky,” Duckworth said of Richards and Pannam combinaton. “I knew Lou from the dances at the Collingwood Town Hall. He used to swear a fair bit.”

That was the last game of the 1943 home-and-away season, and Duckworth had to wait until Round 9 of the following season to play his next – and ultimately final – VFL match.

It came against Geelong at Victoria Park, with the Magpies emerging victorious by 35 points.

Duckworth enjoyed his brief time at Collingwood, but then transferred to Camberwell in the VFA.

Sadly, a serious knee injury suffered in one of those early games put an end to his football career.

He was a bookbinder for 50 years – with Sands and McDougall, the Government Printing Office and later Baillieu Library, Melbourne University.

He served for a time in the militia in the Australian Army Service Corp but was considered as essential services during the Second World War when working for the Government Printing Office.

His employment saw him bind the commemorative book for Queen Elizabeth II on her first Royal visit to Melbourne in 1954 – a decade after his final game for Collingwood.

“When I was working at the Government Printing Office, someone came up to me and said ‘I’ve got a job for you’,” he said. “He wanted me to bind the book for the Queen.

“All folded books have got what they called a spine, so Billy Duckworth has got his name in one of them – the one for the Queen in 1954.

“It was given to the Queen and I went home and made one for myself as well.”

Duckworth did not spend a long time at Collingwood, but his link with the club has lasted ever since.

An enthusiastic member of the Collingwood Past Players’ Association, he attended the organisation’s annual dinner for 47 consecutive years before a broken hip at the age of 90 stopped him from going that year.

But, at 96, he was the oldest living player at the 2014 Collingwood Forever function, which was held to honour every player to have worn the black and white jumper.

He particularly enjoyed sitting next to George ‘Chumma” Nelson’s wife and daughter on the night and recalling some history for them.

He might have had a Richmond team poster in his nursing home in the northern suburbs, but Bill Duckworth will forever be a Collingwood footballer. And he has always been proud of that fact.