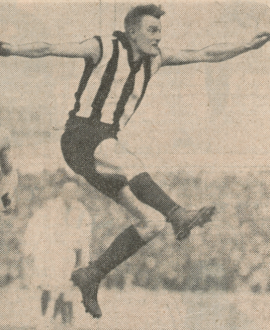 Broad shoulders and an indomitable spirit resonate through two key phases of Bill Aldag’s life. As a footballer, he used his strength and determination to win a spot in the last of Collingwood’s four consecutive Premierships. As a soldier, he utilised those same assets to inspire his mates and show courage in the face of overwhelming adversity.

After stints with Brunswick in the VFA and Footscray in the VFL, Aldag, a butcher by trade, transferred to Victoria Park. A follower/forward, he was described as a “bulldog” with a style similar to Percy Rowe’s – prepared to do plenty of hard, bullocking work. Aldag played two games late in 1930, was dropped, but then recalled for the Grand Final when Jock McHale decided to add some strength to a team that some thought had run out of steam. At 183cm and 85kg, Aldag fitted the bill perfectly, and he served the club well in that game.

Collingwood’s success brought Aldag two rewards – a Premiership medal (which sadly was stolen from his house later) and first prize in the “fox trot and waltzing competition” with wife Alma at an end-of-season dance night. He played six more games the following year, but never again reached the heights of that October day in 1930.

Ten years after his Premiership success, Aldag enlisted in the army. He served as a sergeant in the Middle East before being shipped back in 1942 to help defend Australia’s borders. As fate would have it, the ship was diverted to Java, where the waiting Japanese took all on board as prisoners of war. Aldag was forced to endure the worst conditions as a POW. He served at the notorious Changi Prison and later the Burma Railway. There, Bill Aldag became a source of help and inspiration to those around him.

For three and a half years Aldag’s wife and daughter were unsure of his fate, and it was not until the end of the war that his loved ones knew he had survived. Aldag arrived home on Derby Day 1945 and backed the winner of the race. But he took several years to acclimatise after his traumatic experience, sleeping on the floor for some time and crying out occasionally in the night. Thankfully, things eventually returned to normal for the Aldag family.

No less a man than Edward ‘Weary’ Dunlop recalled Aldag with great admiration. Dunlop wrote: “Bill was a tower of strength, stretcher-bearing on those rugged mountains, and in the heavy work of cremating the dead. He comes clear in my memory with … those broad shoulders and strong back. He did a really good job for us all.” Collingwood, and the Australian army, could certainly attest to that.