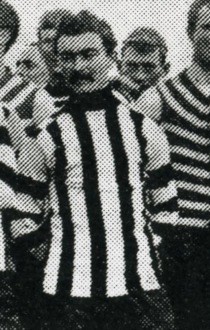 Football’s early days are full of stories of players who managed to play a few games at the top level and then largely disappeared from view. For many years, Bob Burns was thought to have been one of those. Indeed, he’d ‘disappeared’ to such an extent that he was one of only a small number of players for whom the AFL did not have a confirmed date of death.

But of course Bob Burns didn’t ‘disappear’ at all. And recent research (by Collingwood Archives researcher Rob Harris) has revealed much more about what turned out to be an extraordinary journey for the two-game Magpie.

Burns, with a full name of Robert Edward James Burns, first appeared on the footballing radar when he played with Richmond Juniors in 1902 and 1903. He was a good player who could play both back and forward, mostly in either a pocket or on a flank. In 1903 he was named amongst the forwards in a combined metropolitan juniors team that played a combined Ballarat juniors team. Newspaper reports the same year said he’d “followed untiringly” for the Richmond Juniors team, suggesting he’d moved into midfield.

The Magpies had seen enough to pique their curiosity. And even though they’d won the flag in 1903, they named Burns in the opening game of the 1904 campaign against Geelong (at which, luckily enough, a photographer was on hand to grab a shot of the team at a break). He played in the back pocket that day at Victoria Park, and again the following week against Melbourne at the MCG.

Burns’ two games passed largely without mention. The Magpies won both, and he was quietly jettisoned after the second game and didn’t return.

But this is where Robert Burns’ story really becomes interesting.

Just a few months later he decided to walk away from any chance of a VFL career when he was offered a job as headmaster of a school in Ballarat – at the age of 20! Just a few months after that, he was on the move again, this time to another teaching appointment with the Christian Brothers College in Perth.

He continued playing football, with Perth in the WAFA, quickly establishing a reputation as one of the smartest half-backs in the west. But it was his coaching with the CBC team that really drew the plaudits. The WA Sportsman would later describe him as “one of the finest football coaches ever in WA”. “He had that knack of maintaining discipline which is so essential a qualification for coaches in any branch of sport.” The Daily Mail described him as an “excellent general and judge of the game.”

Remember, all this was while he was still in his early-mid 20s! At 25 he took a year off to act as a central umpire. He then returned to captain-coach East Perth in 1910, taking them all the way from near the bottom of the ladder to the Grand Final, further cementing his reputation as an outstanding coach and leader.

Bob was not only a great teacher but a seriously smart man. In 1913 he headed to Edinburgh University in Scotland to study medicine, and he sailed through the course with many honours along the way, including a gold medal for the best essay in the university on the history of medicine. So good were his results that he was appointed a lecturer in anatomy while in his third year!

He continued playing sport, though with not much Australian football to be found in Scotland he contented himself playing more cricket and hockey (and he was made captain of the University As). He also stepped up and, after graduating, served with the British Royal Flying Corps in the First World War, based initially in Dorset and later serving in both Malta and Crete (his brother served at Gallipoli for Australia).

When the War ended he took up an appointment as a doctor in the beautiful Welsh town of Abertillery, nestled in the historic county of Monmouthshire. And that’s where he stayed. He became well known not just for his medical achievements but also within musical and literary circles in London. He retained his links to Australia, too, and even wrote lyrics for a song by a popular Anglo-Australian comedy duo of the time called Flotsam & Jetsam! (coincidentally, Mr Flotsam’s real name was Bentley Collingwood Hilliam). Bob was still in Abertillery when he died at the Bush Hotel there in 1949.

Dr Robert Burns’ football career might not have amounted to much, but the same certainly can’t be said for his extraordinary post-football life.