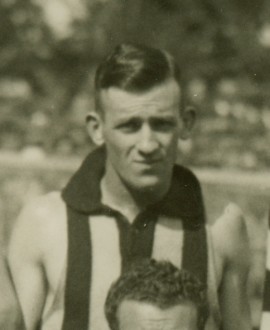 Such was the closeness of many members of the Collingwood Machine teams that their relationships lasted deep into old age. One of those connections, between utility players Bob Muir and George Gibbs, lasts to this very day.

Muir was “a solidly built [footballer] who enters the fray determinedly” and who was recalled as “quiet, but who could fight like a threshing machine”. His teammate, George Gibbs, was also handy with his fists and fought in the ring briefly before turning his hand to football.

Muir was born in Boulder, in Western Australia, where his father worked in the gold mines. The family moved to Dight Street, Collingwood, and Bob played most of his early football with Fairfield. Recruited to Victoria Park in 1927, he made his debut in the back pocket in the first game of the season. At once it was Muir’s aggression and solid work that defined his game. The Sporting Globe praised him after that first game, remarking, “It is his determination that has been most pleasing.”

Muir proved to be a solid, reliable defender. He was strong and tough and, as already mentioned, loved it when the going got rugged. He was the kind of defender you liked to have on your team, not as an opponent.

But despite continuing good performances with the reserves, the depth of the Magpie team was such that Muir could manage only intermittent senior appearances. He played three games in 1927, five in 1928 and just two in 1929. He never complained about his frustrating omissions from the team, but when he was asked to join teammate Leo Wescott at Longford, in Tasmania, in 1930, he had little hesitation. He had a brilliant season with the club, and was a star in the Northern Tasmanian clash with Fitzroy late that season. One report said: “Muir has been a model of consistency … whose solid play and sound marking have finally demanded notice. Against Fitzroy, he was consistency personified on the half-back line.”

His performances in Tasmania were enough to secure him an invitation back to Victoria Park for the 1931 season, but his output was limited by an eight-week suspension for kicking Hawthorn’s Jack Ryan. Muir was lucky to escape Glenferrie Oval after that game. When he was making his way to the dressing rooms after the game, “a rush was made towards him but he was saved by the wire caging on the race. Police were called and were quickly on the scene as hundreds of people waited for him to reappear, but Collingwood snuck him out unnoticed.”

Strangely enough, Muir’s most productive season with the Pies also turned out to be his last. He managed 17 games in 1932, more than in his other four seasons combined. Yet the selectors were still content to let him go at the end of that year, after which he put together 22 games in two seasons at Footscray and two more in a short-lived spell with Fitzroy. He also played football for the Dummett Shoes team.