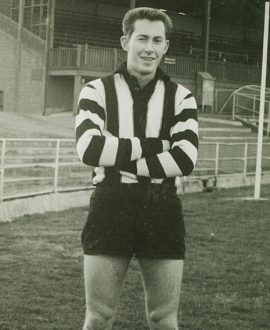 Few players have had their careers bookended by the sort of newsworthy incidents that marked Brian Dorman’s time at the top. But while he started with a bang that was almost comical, the end was definitely no laughing matter. And there was outrageous misfortune in the middle too.

Brian’s crazy journey started late in the 1953 season, when the Pies were on their way to a Premiership. One training night in August, eagle-eyed observers noticed a tall, unfamiliar youngster in an Essendon jumper going through his paces. Nobody knew who he was, or where he had come from. But they could see that he was bloody good.

Soon, journalists started asking questions. The Magpies told anyone who asked that the kid was “just a promising local junior”. The next night at training he flew high for a couple of speccies over Neil Mann during match practice, and the queries grew louder. Again, the Magpies stonewalled.

As it turned out, this was a masterpiece in canny recruiting. The player in question was a 16-year-old Brian Dorman, from Merbein, near Mildura. He already stood at 6’2” and weighed around 14 stone, making him a formidable physical presence. He played centre half-forward or full-forward and took turns in the ruck. The Pies had been interested in him for a while, but they heard on the grapevine that another club, Melbourne, was also interested.

So they quietly brought Brian down for those two training runs, and disguised him in a Bombers jumper in the hope nobody would notice. When his starring performances at both sessions led to questions, the Pies obfuscated. Then, while everyone else was still asking questions, they sent committeeman Vin Doherty up to Merbein to meet with his parents. By the time Vin left, he had secured both parental approval and Brian’s signature.

The Herald revealed the elaborate mission the following Wednesday, in a story titled “Magpies Disguised Star Recruit”. It was an odd way to first come to the football public’s attention.

But Brian was unfazed. A country kid but with an air of quiet confidence, he’d been playing with Merbein under-16s from age 10, and with the seniors from 15 (he kicked four goals on his senior debut). And is if to confirm just how unflappable he was, when he came to Melbourne early in 1954, he even lived with Lou Richards at the infamous Phoenix Hotel in Flinders Street! That was notsomething for the faint-hearted – but he stayed there for seven years.

Brian played a couple of great practice matches, but suffered some early bouts of homesickness and was considering going back to the farm. He was offered some encouragement, however, when he was elevated to the senior list after just three games with the reserves, where he had looked completely at home.

But even his renowned composure was rattled when he was approached by two guys in trenchcoats in a laneway as he was returning to the hotel late on a Thursday night after going to the pictures. They asked if he was Brian Dorman. He said he was, and prepared for a fight. But it turned out to be two journalists who were out looking for him for a story – he’d just been chosen to play for Collingwood’s senior side, still at age 16.

Brian was overwhelmed. He was a Magpie supporter, and told the reporters: “I’ve wanted to play with Collingwood ever since I can remember taking an interest In football. It’s a terrific thrill.”

But overwhelmed didn’t mean petrified. His brother arrived from Merbein late on Friday night to watch his debut and found Brian already asleep. The next morning they discussed the game, and it was clear that Brian had already done some homework on John Hyde, the Geelong centre half-back he would be facing, and “had it all figured out how to handle him”.

Things didn’t quite go to plan, at least initially. The Age reported that he “seemed slightly lost and undecided in the fierceness of the game” at first, but he was then switched to his favourite position of full-forward in the last quarter where he kicked two goals and showed “plenty of promise”. The Sporting Globe said his kicking early in the game had been “wretched”, but that he became a winner after moving to full-forward. “He’s got football nous and a big frame,” the paper said. “All he needs is experience.”

The Magpie selectors soon decided that experience needed to come through the seconds. After just one more senior game, against Richmond, he was sent back to the reserves for a better grounding (though he also missed several weeks after being hospitalised with an ingrown toenail). And in 1955 he spent the whole season bar one game with the reserves.

Nicknamed ‘Horse’ because of his long, slow-striding gait, his natural talents were obvious. He was a fine mark (“Take a look at the size of his hands and don’t wonder why it is hard to spoil his marking,” noted The Sun), reasonably agile for a guy of his size, and a splendid kick on both sides of his body. He was particularly adept at the drop kick. He just needed more time to adjust to the hurly-burly of League football.

It all seemed to come together in the first half of 1956, when he played the first 10 games of the season. He started the season at centre half-back, then was tried in the ruck and even on a half-forward flank before returning to full-forward. The frequent positional changes seemed to unsettle him, and he returned to the reserves for the back end of the season.

But serious misfortune befell him after the season, when he was on his way to Puckapunyal to report for National Service duty. He rolled the jeep he was driving (it had 300 breakfasts for his comrades in the back) and broke his leg, which forced him to miss the 1957 season.

He returned in 1958 and enjoyed the most consistent season of his career, playing 16 games and alternating between centre half-back and centre half-forward. Unfortunately he rolled his ankle in the second semi-final defeat to Melbourne. The 1959 season was tougher, affected by injuries and loss of form, but he returned to good form in 1960. Leading into the finals he hit a purple patch, with three successive bags of three goals. The third of those bags came against Essendon in the first semi-final, and helped propel the team into a preliminary final. Brian was arguably in the form of his life.

Then it all came crashing down. During the first quarter he took a mark, attempted to kick on the muddy surface of the MCG, and his left knee appeared to cave in on him. The moment was captured perfectly by a Sun photographer, and the resultant graphic image – of Dorman falling to the ground and clutching his left knee while screaming in pain – became one of the most famous football photos of the time.

That was the moment Brian Dorman’s footy career ended. He made a half-hearted comeback attempt a few years later with Wangaratta, but the knee was no good and he couldn’t go on. He could still play cricket, however, and he got around the problems caused by running by (a) keeping wickets and (b) bludgeoning the bowling with a ferocious mixture of fours and sixes, establishing a reputation as one of the most fearsome hitters in country cricket. He had come to Wangaratta to work as stable foreman for racing legend Hal Hoysted, and from there he ended up at Berrigan. He would go on to become a trainer in his own right and a bit of a local legend (the Berrigan Race Club annual name one of their races the Brian Dorman Memorial Handicap).

Taken as a whole, Brian Dorman’s career was remarkable on many levels. There were 51 senior games, 50 more in the reserves, a crazy-young debut, a bizarre injury in the middle and a devastating injury to end. But perhaps the most remarkable thing of all is that, when it ended, he was still only 23 and with so much more potentially in front of him.