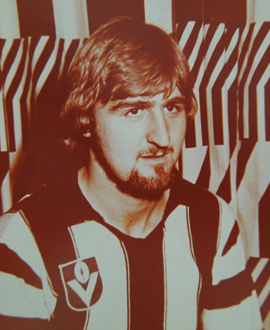 Bruce ‘Pancho’ Gonsalves was a larger than life character whose massive build, strong hands and rucking skills should have landed him more than the five senior games he ended up playing.

But Collingwood’s richness of ruck stocks at the time he was making his way in the game, combined with Pancho’s own notorious lack of interest in training, meant he was forever destined to be one of those ‘coodabeen’ players.

Gonsalves came to Victoria Park from Greensborough in 1975, aged 18, having previously played his junior footy with Kingsbury. He was a seriously big man even then, standing close to 200cm and weighing close to 100kg. He spent most of that first year in the reserves, acclimatising to the speed of VFL footy.

He got his first taste of senior football in unusual circumstances late in the season – in what turned out to be a famous game. The Magpies made eight changes at selection before the Round 19 game with Essendon – but Bruce wasn’t one of them. Then Murrie Batt withdrew late with an infected foot, Andrew Ireland came off the bench to replace him and Bruce came out of the seconds to act as 20thman. He replaced Doug Gott late in the game and didn’t trouble the statisticians.

This was a game that became memorable because Phil Carman made his return after eight weeks out with a broken foot. He went berserk that day, kicking 6.8, but still attracted most attention for wearing white boots for the first time. The next week he would kick a lazy 11 against St Kilda.

But Bruce Gonsalves wasn’t there to see it, having been dropped after his brief bench appearance (though it wouldn’t be his last connection with ‘Fabulous Phil’.)

The 1976 season was a vast improvement for the man everyone called Pancho. He played 16 more reserves games, kicking 48 goals, mostly from full-forward, and becoming a key part of that year’s reserves premiership team. He also managed four more senior games, including a highly promising haul of four goals against Hawthorn in just his second senior game.

He had a huge body, which he used to great effect, wonderfully sticky hands, and was a fine kick for goal. He had a mean streak, to be sure, and was not one to be messed with – he even managed to take out a few senior teammates at training. He was also a fine ruckman – one of his former teammates described him as ‘bloody good’. But he had Len Thompson, Peter Moore and Bob Heard ahead of him in the big man queue, and Murrie Batt alongside.

His 1976 performances as a ruckman/forward led most to think he had a decent career ahead of him. Instead it ended right there, after just five games.

In the last of those, against North Melbourne, he had several early opportunities to mark, but each time was spoiled by Phil Carman coming over the top. When he suggested to Phil that maybe he should have left the mark to him, Phil replied with a smirk: “Pancho, do you really think all these people here today came to watch you play?” Gonsalves ended the game goalless – and never played for the Magpies again.

Tom Hafey came in at the end of that year, but his meeting with Gonsalves was brief. “You’re Pancho?” he asked. “You can obviously play, but you’re lazy.”

Gonsalves admitted later his coach was right. “I’m a very slack person,” he would say years later. “I wasn’t dedicated to the cause. It (the game) was just not that important to me.” He also hated training, and that was pretty much a death sentence with a notoriously hard and physically demanding coach like Hafey.

Carlton was interested in taking him to Princes Park but the Magpies didn’t want to deal with the old enemy, so by the end of May 1977 he was on his way to City South in Tasmania. He later played with both Preston and Northcote in the VFA, where he won a lot of his admirers for his often wild antics.

He had been hugely popular at Collingwood, a guy who didn’t take football – or life – too seriously, and who was always stirring up his teammates. He was one of those great dressing room characters around whom footy clubs are built.

He had been a diabetic most of his life, and battled the condition even while he was playing. He remained a regular at Collingwood Past Player functions, but suffered a short illness in 2020 and died suddenly afterwards. ‘Pancho’ Gonsalves was dead at 63 – a big man and a big Collingwood character.