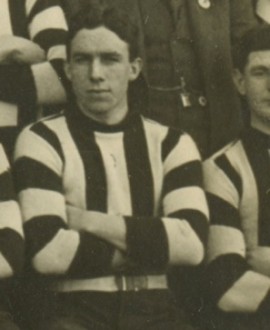 Few families have given more to football over the years than the Rush clan.

At Collingwood, Bob Rush is one of the most famous names in the club’s history. Our runner-up in the best and fairest award is named after him, as was one of the stands at Victoria Park. As a player and administrator he was a wonderful servant of the Collingwood Football Club, and the game itself.

And it seems that one of his younger brothers, Bryan, was cut from very similar cloth.

There were eight Rush brothers, and five of them played VFL football. Bryan, born in Port Fairy, was 13 years younger than Bob, who was the club’s treasurer by the time his younger sibling joined him at Victoria Park from junior club Beverley in 1913. Bryan wasted no time leaving his own mark on football.

Whereas Bob had been almost exclusively a running defender, Bryan was a forward. He was built along similar lines to Bob, and had the same sense of attacking flair and run. He was a beautiful kick, and had a real nose for goals. He kicked his first (equalling Bob’s career tally) in just his second game, and in his third, against Geelong, bagged four. He followed that with another bag of four two weeks later, causing the press to sit up and pay attention.

“Young Rush is a very promising forward,” wrote Sport newspaper. “His work on Saturday was clever and his kicking excellent.” The Football Record also noted how the younger Rush was “carrying on the good name of the family”. And everyone was noticing his kicking, with two of his four against Geelong having come from magnificent, tightly angled drop kicks.

In all, he kicked 15 goals from 11 games in that debut season – a fine performance. He played a further six games, for two more goals, in 1914, before war broke out. By that stage Bryan, who had been an outstanding student, was working in the Treasury Department of the Public Service, and he enlisted in the early weeks, sailing with one of the first contingents of Australians in 1914.

But it didn’t take the army long to realize Bryan’s talents might be put to better use than on the battlefield. He was seconded to the UK from Egypt in early 1915 to join the Paymaster’s Unit. Bryan served for most of the war with Army Headquarters in London and returned home as a Captain. He and his brother Bernie were welcomed home with a big celebration to their home in Richmond.

Bryan’s son, Bryan Jnr, once told the NSW Australian Football History Society that, like many of his generation, Bryan Snr never talked of his war experiences.

In 1920, Bryan moved to Sydney, completed the necessary study to become a chartered accountant and joined with a fellow returned soldier in setting up an accountancy firm that would last for decades and become a major factor in Sydney’s financial scene. In World War II, he fronted up again, serving as District Finance Officer at the Sydney Barracks, with the rank of Major.

But the remarkable thing is that, even though he’d moved to Sydney, his love of, and commitment to, Australian football, did not diminish. In this he was uncannily like his older brother Bob.

Bryan Rush ended up becoming a pioneer of Australian football in NSW. He continued to play football for years, with the North Sydney club and also for the state (he represented NSW on 10 occasions). In 1923 he captained a NSW team that defeated what was a Victorian ‘B’ team – a result described as “a turning point on the road of success for the Australian game of football in NSW.” He also acted as a state selector, and was coach of the 1929 NSW team that beat Tasmania – another big scalp for NSW football. He was a passionate advocate for the Australian game in the media and other public forums. Little wonder than that, in 1935, he was awarded a special ‘Honour Certificate’ for his “distinguished services rendered to the Australian National Football Code in the State of New South Wales.”

Bryan was also an outstanding cricketer, and played first grade with Manly in NSW. But his son recalled that he rarely talked about any of his sporting experiences. Which is a pity, because if he had, we might have the answer to a question that still intrigues his family: is he the player acting as ‘stepladder’ to Dick Lee in that mark against Carlton in 1914 – one of the most famous images in football history? For now, all we can say is ‘probably’.

That would be a nice legacy to leave from a life in football that had a much more profound impact than a career tally of 17 VFL games would suggest.