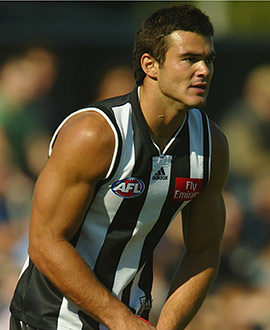 Originally from South Mildura, Tarrant moved to Bendigo in 1996 on an AFL scholarship.

In his younger days he was a top basketballer and made the state under-15 squad before making the decision to concentrate on football.

He was Collingwood’s first pick in the 1997 draft, but he had a slow start to the 1998 season when he injured a wrist during the pre-season campaign, but he broke through for his first senior game by the third round.

Late in the year he turned in a couple of impressive displays, notably in the final round against Sydney. Tarrant was aware that he was probably given more senior games than he deserved in 1998, but the experience stood him in good stead.

After suffering off-season pelvic problems he did not stake a claim for a regular spot in early 1999. Midway through the year, a match-winning four goal effort from centre half-forward against St Kilda caught the eye, as did screamers against Port Adelaide and North Melbourne.

Although Tarrant returned home to Mildura before the start of the 2000 season, there was no way known Collingwood was going to allow him to abandon his AFL career as they always saw him as one of the most exciting youngsters on its list.

Despite his delayed start to the season, Tarrant played several outstanding games for the Magpies and pulled down many spectacular marks. He had hamstring problems late in the year, but still managed 19 senior games for 28 goals.

Tarrant benefited by the arrival of Jarrod Molloy in the forward line in 2001 and he had a strong season at full-forward, topping the club’s goalkicking with 53.

Along the way he took a memorable pack mark against Melbourne at the MCG on the Queen’s Birthday which ranked amongst the truly great grabs.

A hip injury dogged him in 2002 and his inconsistency was a frustration, but he had a mighty 2003. In some games his pace and marking ability made him virtually unstoppable such as the clash with St Kilda when he took 17 marks and kicked six goals. Some opponents tried to stand in front of him to limit his leads, but it did not always work.

He was strongly influenced by Magpie assistant coach Terry Daniher who noted that Tarrant needed his space “but also liked reassurance and feedback”. Daniher likened him to Paul Van Der Haar for having a relaxed attitude off the field but a competitive and proud nature on the other side of the white line.

He showed his maturity in round seven against Adelaide when he kicked the winning goal after the siren. He seemed more comfortable with public attention but did admit: “I love playing footy, but I don’t like to get recognised too much walking down the street.”

Tarrant played in Collingwood’s Grand Final sides in 2002 and 2003 and was selected as an All-Australian in 2003 as well as running second in the best and fairest.

He injured a hamstring early in 2004 but shouldered the burden in attack with others injured or lacking form. As ever, he was prepared to cover a lot of ground.

Tarrant was patchy for the next two years and was unreliable in attack. In 2006 he also got into hot water for some off-field indiscretions.

At the end of the year he was traded to Fremantle in a deal that netted Collingwood Paul Medhurst and Ben Reid (the latter via the National Draft).

At Collingwood he had been shielded from the media, refusing to do interviews, but he opened up eventually at Fremantle and commented in mid-2008 that football had never been the top priority in his life. He reflected that he had probably not kicked on since his boom year in 2003 but laughed off suggestions by former captain Nathan Buckley that he could have been as big a star as Lance Franklin.

In 2009 he was switched to defence and found a new lease of life, running fourth in the best and fairest and being unlucky not to win All-Australian selection.

He had Achilles then knee problems at the end of 2010, but it was common knowledge that he and his wife wanted to return to Victoria, and he achieved a trade back to his old club.

Tarrant capped off his career with two fine seasons in the Black and White jumper, trading in his old No. 20 for No. 2. He finished in the top 10 in the Copeland Trophy in 2011 and was one of Collingwood’s best in the Grand Final defeat when he had Geelong’s James Podsiadly covered before his former Magpie teammate went down with a dislocated shoulder.

Injuries hampered his final season, but he still managed to feature in the 2012 finals series when he was again one of his side’s most reliable players.