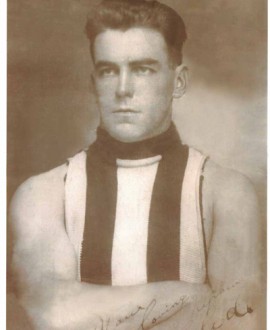 Clyde Smith’s time at Victoria Park was brief. Sadly, so too was his life.

Smith, a defender from Heidelberg who had earlier played with Port Melbourne and the Sixth Melbourne Scouts Old Boys, made his debut against Carlton in the last home-and-away game of the 1921 season. He didn’t do enough to retain his spot for the Magpies’ only final that year, but he was on the list again in 1922.

He played three of the first four games in 1922 – and then promptly headed bush, to play alongside Bill Twomey at Stawell. Then, remarkably, he returned to Collingwood to play in three of the last four games of the season as the Magpies were hit by injury and illness. As The Australasiannoted at the time: “Collingwood, in their extremity owing to illness, accident and other disasters, tried the Magpies from the country swooping back to the nest at Victoria Park … Twomey and Clyde Smith, having finished their engagements at Stawell.”

Despite filling in for former skipper Tom Drummond in a couple of those games and acquitting himself very well, according to the Football Record, Smith chose to once again go bush in 1923.

He was a star in the bush. A strongly built running defender, The Weekly Timesin 1923 described him as “a fine specimen of physical development … Smith is a fine mark, a good kick and has plenty of pace.”

In the years that followed he would coach Koroit, Allansford and Rochester (the home town of his wife), and he also competed in the Stawell Gift. In 1924 he even led a Bendigo league team that took on and beat a touring VFL side. He then played with South Ballarat, where he was regarded as a “sterling player”, and held in such regard by his police force colleagues that he was presented with a travelling rug in a public farewell when he left for Bendigo in 1930.

Unfortunately, it was to be his police career that would end his life prematurely.

He continued his love affair with football in Bendigo, first playing with South Bendigo and in 1934 leading the local St Kilians team to a flag.

He moved back to Melbourne at the end of that year and joined the traffic control branch. Just days into the new year, however, and only 23 days short of his 34th birthday, he was shot and killed while temporarily on duty at Frankston for the scouting jamboree. His wife and five children were staying at a nearby campsite at the time.

He was accidentally killed by a young colleague while the two were sheltering from a storm outside the Frankston Post Office, the younger man’s pistol discharging while he was trying to examine a loose magazine. He had opened the magazine to see if there was a bullet in it when the gun went off. The Coroner would later rule it a ‘death by misadventure’ and condemned the fact that Smith’s colleague had had no training or experience in the use or handling of firearms. Despite the tragedy, three of Clyde Smith’s sons would go on to become policemen.

His death brought great sadness to the friends he had made, especially through country football.

“He was one of the best footballers seen in the country,” wrote The Weekly Times. “He was well known in the Wimmera, having played for Stawell in 1922 under Bill Twomey. They were great pals. Clyde was a splendid half-back, and gave Stawell sterling service. He was very popular, and his tragic end came as a shock to his large circle of friends in Stawell and other Wimmera towns.”

Please note: We’re aware that some of the details on this page still show Clyde as having played six games. A technical issue is stopping us from fixing that at the moment, but we’re working on it!