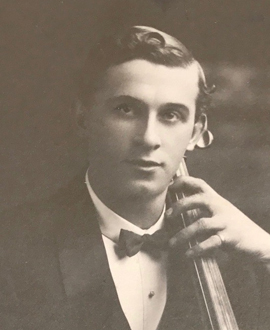 IF you are only going to play one game of league football, you might as well make it a memorable one.

And Colin Dufty’s one and only senior match in black and white came about in one of the most famous matches in Collingwood’s first 25 years of existence.

It took place on April 25, 1914 – exactly a year from the date of the Gallipoli landings– and a glance at the team sheets from that day shows how the First World War would impact on the country and the indigenous game it spawned.

So many of the players would serve their country in the coming four years, and a number of them would pay the ultimate price, including two Magpies – Alan Cordner and ‘Paddy Rowan’, who would die under his real name, Percy Rowe.

The match ended in a dramatic draw with Carlton on a day that saw Collingwood forward Dick Lee launch himself into the air and take one of the first recorded speccies captured by a photographer. The towering mark is frozen forever on film.

It was Round 1 of the new season and Dufty – a nifty little rover from South Yarra Juniors – was one of two new men for the Magpies. He was 24 when he ran out at Victoria Park, standing 170cm and weighing only 62kg.

Few of the large crowd in attendance that day could have known about his exotic place of birth. Dufty had been born in Suvla, Fiji, on November 29, 1889, almost 27 months before the birth of the Magpies.

His father, Francis Herbert Dufty, hailed from Surrey, in England, but made his way to Australia in the late 1860s before taking up residence in Levuka in June, 1871. At the time, it was the capital of Fiji.

Francis set up a photographic and jewellery business with his brother, Alfred, next door to the Fiji Times newspaper before shifting it to Suvla when it became the capital of the country.

The Dufty family would move back to Australia in 1892, the year that Collingwood was formed, with the almost three-year-old Colin eager to make a fresh start in his new country.

He took on the indigenous game as a young footballer, and after impressing with South Yarra, Colin Dufty was given his chance with Collingwood. And he made a solid impression with his new side in that maiden game.

He kicked a goal in the third term after some fine work from Dan Minogue (another who would soon answer the call to arms). When Dufty kicked the six-pointer, The Argus observed: “it seemed as if Collingwood were to win against the merits”. And the Leader praised the “the new rover in Collingwood’s ranks”, saying that he had provided “yeoman service.”

But for reasons lost over time, that would be the sum of his brief strut upon the Victoria Park stage, and by the middle part of the season, he had been cleared to Prahran, where he had greater success.

Three years later, Dufty would sign up to fight for his country, enlisting on September 12, 1917, just a few weeks before many of his former Collingwood teammates contested for the premiership.

He was 27, married to Minnie, and employed as a saddler, when he joined the 8th reinforcements of the 3 Pioneers. Sailing on the Nestor, in late November, 1917, he disembarked at Suez just 10 days before Christmas that year.

As the war headed towards a critical stage in its final year, Dufty spent the first half of the year on training courses in England before sailing for France in late June 1918 where he joined the Pioneers in the rundown to the climax of the war.

He would return to Australia seven months after the Armistice was signed, arriving back in the country in mid-1919, the same year Collingwood would win its fifth VFL pennant.

But that was not the end of his civic duty. More than two decades later, Dufty would put his hand up for more service in the Second World War on October 31, 1940, and would serve through to the end of the war as a staff sergeant.