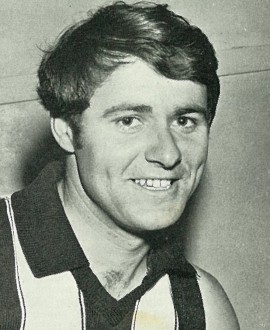 Collingwood has known plenty of outstanding kicks of the football over the years, but arguably none better than midfielder-turned-defender Colin Tully.

Ask anyone what they remember about Tully and the first thing just about everyone mentions is his kicking. Prodigious drop kicks, torpedo punts that seemed to fly forever, sizzling stab kicks … Tully had them all in his locker. In 1966 he drop-kicked a goal from the centre of the MCG that was variously estimated at 85-95 yards (78-86m). The same year he drew admiring gasps from journalists who couldn’t believe a “60-yard stab pass” he delivered that never went above head height before landing on Ian Graham’s chest. In 1966 he won a long-kicking competition conducted by TV show World of Sport with a 72m torpedo, and did it again in 1970 in a competition find the best all-round kick in the country. He was, without question, one of the finest kicks in the game in the mid-to-late 1960s.

And that is just what everyone in his home town of Bendigo had been expecting. Colin and his older brother Trevor were the biggest kicks in the District – and two of the best prospects. The brothers learned to kick on the road outside their home, the true surface giving them the confidence to kick through the ball at all times. Trevor played full-back with South Bendigo and regularly roosted the ball into the centre circle. But he had to retire early because of leg injuries just as Colin was arriving on the scene.

In 1963 Colin captained South Bendigo Under-18s and won the competition best and fairest award. A year later he was South Bendigo’s senior team champion, having played in the centre all year and been named the Bendigo League’s ‘Recruit of the Year’. By this time he was regarded as the best prospect to come out of the Bendigo League since Hawthorn’s 1961 Premiership stars Graham Arthur and Brendan Edwards had played for Sandhurst. And his meteoric rise was completed in 1965 when he made his way to Victoria Park, the Pies having fought off keen interest from Richmond and Essendon (who he’d barracked for as a kid).

Almost inevitably, that rise continued in his first VFL season. He missed the first four games but played every match thereafter. He ended up amassing 16 games and 11 goals in a highly creditable debut season, and also took home Collingwood’s award for best first year player.

Despite some concerns about his lack of height, the Pies played him mostly in the centre upon his arrival – no mean feat in a team that had played in the previous year’s Grand Final – with some stints roving. He was also tried in defence, something that would become more frequent later in his career.

While his exceptional kicking was a clear standout feature, Tully was also adept at most other facets of the game. He wasn’t overly quick but he was a fine reader of the game with great anticipation. His ball-handling was sure and his overhead game solid despite a lack of inches.

Almost from the time he arrived at Collingwood, Tully was regarded by many as the most naturally talented all-round sportsman on the Magpie list. He was a wonderful cricketer who played more than 100 matches batting at three for Collingwood Cricket Club’s first XI. He was also highly talented at golf, tennis (as a junior he had won some mixed doubles tournaments with a young girl from Albury called Margaret Smith, who would go on to be Margaret Court) and just about any sport he turned his mind to.

Still, he struggled a little in his second season, and it wasn’t until he was moved to a wing late in the year against Richmond that he really hit his stride. That was the game of the legendary drop kick, described by Footy Week as “one of the finest goals seen at the MCG.”. It turned out to have been something of a set play he’d worked out with ruckman Len Thompson, the latter thumping the ball out wide for Tully to run on to, after which he ran around one Tiger opponent and let fly with a glorious drop kick. He won the AWA Footballer of the Week award for his game that day, and would go on to win a trophy for his efforts on Grand Final day.

It seemed as if he had found his niche and, after two seasons, was ready to take the competition by storm. That impression was confirmed when he was chosen to play for Victoria against both WA and SA in 1967. But his 1968 season was blighted by a shoulder injury, and by 1969 he found that others like Barry Price and John Greening were beginning to squeeze him out of the centre and wing slots. But the Magpies recognised how dangerous his booming kicks could be coming out of defence, and he found himself spending more time in the back half.

He hit a purple patch of defensive form late in 1970, after struggling earlier in the year and being sent back to the reserves. But unfortunately his year ended on a controversial note when he was the back pocket assigned to mind Ted Hopkins after the Carlton forward came on at half-time in the Grand Final. Hopkins kicked four goals in the second half, though only two while directly opposed to Tully, inspiring football’s most famous comeback. In the aftermath, plenty of people unfairly blamed Colin Tully for the team fadeout which cost the Pies a seemingly unloseable flag.

Tully felt the fallout from that loss worse than most. It proved to be his last game for Collingwood, and he kept his distance for a long time thereafter.

He continued his playing career with Claremont in the WAFL, and represented WA in 1972. He later coached North Ballarat, then Glenorchy in Tasmania (where he also coached the Tasmanian under-19 cricket team) and also played for Donvale. He returned to Bendigo and dominated local cricket, and would later be inducted – alongside his brother Trevor, a multi-talented sportsman and gun golfer – into the Bendigo Sports Star Hall of Fame.

Colin Tully might not have ended up dominating VFL football as some of his Bendigo fans might have expected, but he still played 92 games, kicked 43 goals, represented both Victoria and WA and left fans with wonderful memories of some of the finest kicking the game has seen.