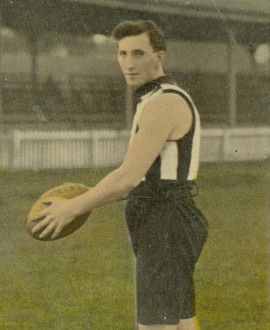 Footballing debuts come in all shapes and sizes, from the triumphant to the disastrous. In Dan Minogue’s case, his first appearance with Collingwood was both.

The 19-year-old was thrown in at the deep end in the opening round clash against Richmond in 1911, starting at centre half-back on the highly rated Tom Heaney. After a slightly uneasy start, Minogue bounced back to play a wonderful game, regularly spoiling Heaney’s marking attempts and minimising his influence on the game.

It looked pretty much like the prefect debut until, just minutes from the end, he was on the wrong end of a fierce bump and broke his collarbone.

The youngster was disconsolate, but after nine weeks on the sidelines managed to fight his way back into the team in time for the finals. He held his place through to the Grand Final against Essendon, but further disaster awaited there when he again broke his collarbone in the opening minutes of the game.

Despite pain that Minogue later described as “excruciating”, he managed to play out the game – and even kicked a goal, courtesy of a one-handed mark. It wasn’t enough to win the Premiership, but it was certainly more than enough to win the respect of his teammates. After just one injury-blighted season, everyone at Collingwood knew that Dan Minogue was a special footballer.

He had come to Collingwood with a bit of a ‘buzz’ about him. At least five VFL clubs had approached the talented young defender/follower from Bendigo. Dan had been a miner there, and had worked alongside another Magpie in Richard Daykin. But he hated life in the mines, having seen too many people become injured or sick or worse, and decided that football was his ticket out. In the end, he decided on Collingwood because they’d organised attractive employment at the South Melbourne gasworks.

He may well have started his VFL career at 18, but fell foul of the Permit Committee when he played a senior game with California Gully in 1910, thereby rendering him ineligible for the Pies. But Collingwood maintained its interest, and even took him with the team on its end-of-season trip to Adelaide.

By that stage the Pies were Premiers, and it was no mean feat for Minogue to break into that line-up for the opening round of 1911. Injuries aside, he looked at home from day one. Within a couple of years he was firmly established as one of the best followers in the League.

He was immensely strong, with a solid trunk, thick legs and big arms – an ideal build for ruck play in those times. He also loved playing across half-back, where his strong marking and long kicking could come to the fore. He was fiercely aggressive (he was a pretty handy boxer outside of football) and did not shirk any issue on the ground.

His teammates loved him for his courage, selflessness and sheer will-to-win. Plus he had a very astute football brain. Still, it was something of a surprise when, at age 22, he was elected the Magpies’ captain.

Despite his tender years, Minogue was an inspired choice as skipper. He responded with a career-best season in 1914, winning a medal from Havelock cigarettes as the best player of the season, and was soon regarded as the best captain in the VFL. One hundred years later an exhaustive research project carried out by the club would confirm he had been Collingwood’s best player both in 1914, and jointly with Les Hughes the previous year.

Minogue maintained that high standard for the next two years. When, in 1916, he decided to leave football and take up the fight overseas, he was hailed as a hero, chaired from the field on the shoulders of his adoring teammates after his farewell game, and cheered by opposing fans.

Minogue was a gunner in the First World War, and was a regular correspondent with the club and his teammates back home. In one of those letters, he bemoans how long it has been since he had seen his Magpie teammates at the Front: “I am a good bit away from them,” he wrote “but I would give anything to meet them. Just fancy a man having the luck to meet ‘Doc’ Seddon, Jim Jackson, Walter Raleigh, Harry Matheson or Sam Mortimer. I believe I would get drunk. If we all get back for the 1918 season, we will have some team.”

In another letter to Magpie George Anderson, as he’s preparing to leave England (where he played in the historic AIF game in London late in 1916), Minogue seems well aware of the uncertain future that awaited any soldier in those times: “Well old boy, we are going away on Thursday morning to somewhere in France. I’ve written a good few letters to you from England. I trust you have received them all. Goodness only knows how long it will be before I write you again. Perhaps when the war is over, if luck sticks to me. Remember me to all the boys.”

Luck did indeed stick to Dan, and he returned to Australia in 1919. Collingwood was buzzing ahead of his return, and all sorts of celebrations were planned for his homecoming.

But on his return he stunned the football world by seeking a clearance to Richmond (he was apparently unhappy with the way the club had treated a close teammate of his, Jim Sadler, while he’d been away). The Magpies felt betrayed and were furious, refusing his clearance and forcing him to stand out of football until 1920. The club also, famously, turned Minogue’s photo to the wall.

Minogue took up at Richmond as captain-coach in 1920 and immediately led the Tigers to back-to-back flags – the first, gallingly, over Collingwood. He was in charge at Punt Road for six years, then coached at Hawthorn, Carlton, St Kilda and Fitzroy. He was a wonderful coach – shrewd, tactically astute and cool under pressure. The leadership qualities that had been so apparent from his early days at Collingwood remained throughout what turned out to be a long and varied life in football. It took decades for the Collingwood Football Club to forgive him.

Dan Minogue was a very, very good player and an outstanding young leader in the years before he went to the First World War. He also represented the club wonderfully during his time at the Front. Had the war not intervened, he would almost certainly have ended his career as one of Collingwood’s longest serving captains. Had it not been for his defection to Richmond, he would surely also have been regarded as one of its finest.