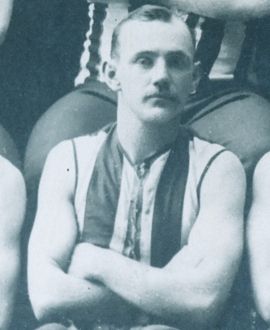 Even today, it is every football-loving kid’s dream to kick the winning goal in a Grand Final. That’s a dream ‘Danny’ Flaherty got to live out in 1896.

Flaherty – christened Hugh James but universally known as Danny, in part to distinguish him from his father, who was also Hugh James – had joined the Pies from Port Melbourne in 1893, having played 31 games in three seasons with the bayside club. He quickly became a regular at Victoria Park as a lively rover and small forward. He was well regarded – fast, gutsy and ‘as game as a bantam’. Together with fellow small men Harry Dowdall and Jack McInerny he became a fan favourite, as part of the Magpies’ first ‘mosquito fleet’.

“Flaherty is as game as they make them,” noted The Age in 1894. “His roving was as brilliant and lasting as ever.” “Though Flaherty is a small man, he is a heap of strength to Collingwood,” said The Sportsman. “Flaherty worked like lightning on the ground, and his roving was top notch, especially given his weight and the nature of the going.” “Flaherty played a splendid game for the Magpies in the crush, doing a tremendous lot of work, and doing it, too, like a real little sportsman,” wrote The Argus in 1895. ‘Observer’ in The Argus nominated him as one of the best midfielders of the 1895 season.

Still, for all the praise directed his way, he was not regarded as one of the game’s stars. But that all changed late in the 1896 Grand Final when he was slung to the ground by a South Melbourne opponent. A free kick was given – a little controversially – and the fate of the game came to rest on the diminutive Flaherty’s shoulders. He wasn’t far from goal but the pressure was immense: somehow, he kept calm and kicked truly for the goal that gave Collingwood its first ever flag.

Flaherty was the focus for many of the Premiership celebrations. At one of the many parties in the players’ honour, this one at the Collingwood Town Hall, he was presented with the match ball, silver-mounted on an ebony stand and encased in a glass dome. A toast and musical number were then performed in his honour.

The magazine Table Talk reported: “From being intensely funny, matters grew very serious for Dan Flaherty, the kicker of the “goal that won the premiership.” The culprit was called upon by the president to receive a presentation of the leather sphere that sailed through the posts; the self-same sphere that has brought such lashings of glory and “lager” to the Maggies. The ball was nicely mounted on an ebony stand, and bore on a’ silver plate the inscription, “Presented as a souvenir of the greatest match, Collingwoodv. South Melbourne, played on 2nd October, 1896.” Had there been a band present possibly it would have struck up “See the Conquering Hero comes.” As it was, hearty voice was given to “He’s a ‘jolly good fellow, concluding with a round of “Caesars”

The magazine noted that Flaherty responded “in words far more appropriate than are generally heard on such occasions until he reached the end of his tether with the remark ‘I would like to say a great deal more but I don’t know how’.” He then told the crowd that he would treasure the trophy as a precious memento.

Sadly, Danny Flaherty didn’t have anywhere near long enough to savour his Grand Final heroics. He struggled with injuries during Collingwood’s first season in the newly-formed VFL and retired half way through the year after managing just four games. He left top-level football altogether at that point and worked as a labourer. Just four years later he was dead, having succumbed to pneumonia at the tragically young age of 28. Still, no Magpie fan of the era ever forgot his flag-winning contribution on that sunny October day in 1896.