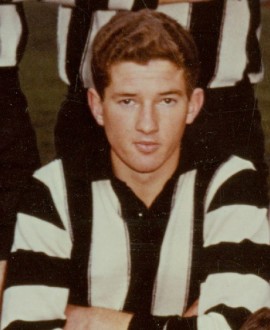 Dave Norman was one of those players whose career should have been longer, and more fulfilling, than it was. A classic Collingwood rover in the old-school traditions, he was seemingly dealt a harsh hand by selectors, cutting short a career that still had years to run.

It had all seemed so promising when the prodigiously talented rover came to Victoria Park in 1961. He had first trained at Collingwood in 1959, playing in a couple of practice matches (listed as ‘Dan Norman’), but returned to his home town of Beaufort and played there in 1959, where he won the Lexton League competition best and fairest award. He moved to Ballarat North the following season, and again won a competition best and fairest, this time in the strong Ballarat League.

By now, the original Form Four he had signed to enable him to train with the Pies had long expired. But Dave had no hesitation in re-signing, despite growing interest from many other VFL clubs.

He made an immediate impact. After one of the early practice matches, the club wrote: “Dave Norman from Ballarat showed he is a player with lots of ability. He roved to a losing ruck but this did not appear to worry him as he sharked many of the hitouts from the opposition.”

The good form continued and, after just one reserves game, the 19-year-old was chosen in the seniors for the second round against Richmond. The next week against North he kicked four goals and made a huge impression, immediately making him one of the hottest small man prospects in the game.

At this stage he was still playing on match permits from North Ballarat, but the Magpies moved quickly to secure his permanent transfer, which came through about a month into the season.

By then he was already an established part of the team, missing only one game for the rest of the year (through injury). He was a classic Magpie rover: tenacious, tough, quick and with a deadly eye for goal. As the Pies themselves described him in an early update: “David is an ideal type of rover, strong, fast, courageous, clever and willing to go into packs to get the ball. In addition he is a most capable forward, adding bite and cleverness to the attacking division.” He was extremely fit (he worked as a physical culture instructor with the Education Department, and would sometimes hold additional PT classes for teammates after training sessions), and quick enough to compete successfully in footrunning events over the summer.

Dave’s impact as a small forward continued to grow in his second year, 1962. He kicked 36 goals for the season, second only to Murray Weideman, including one bag of six against North and half a dozen games where he bagged three. “Norman has the uncanny habit of popping up from nowhere to take a pass, and often being able to run unchallenged into an open goal.”

Despite his roving abilities, which were considerable, it was his goalkicking exploits for which he became best known. After a quieter 1963 he kicked 40 for the season in 1964, the year when the Mosquito Fleet combination of Dave, Mick Bone and Bert Chapman helped propel the Pies to a Grand Final. That included another bag of six, again against North. He then topped the club goalkicking with 32 in 1965.

“He is a nippy little rover with a flair for quick and straight shooting,” wrote The Sun. “Always dangerous near goals. Bob Rose’s shrewd coaching has helped him to earn more kicks in general play, and he ranks among the top rovers.”

But by 1966, his cards seemed to have been marked. Teammates felt he was hard done by at selection (as with Mick Bone). He played only six games for the year, his opportunities limited by the recent arrivals of Wayne Richardson and Barry Price. But he was still only 24, and with his best football seemingly still to come.

Instead, Collingwood let him go back to Beaufort as playing coach. He was a star back in the Ballarat League again, and won the competition best and fairest for a second time in 1968. In 1969 he was transferred back to Melbourne with his work and was invited back to training. He duly regained his position on the list, and a great comeback seemed to be on the cards – but at the last minute he decided not to return to VFL football after all.

That decision was a great pity, as was the Magpies’ willingness to let him go in the first place, because Dave Norman was a fine rover and an excellent goalkicker – and we should have seen much more of him in a Collingwood jumper.