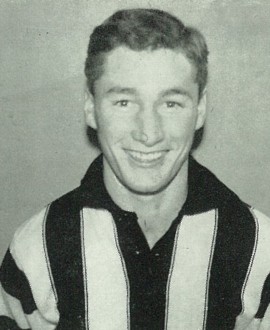 He is just 18 when he runs out onto Victoria Park, behind football luminaries like Weideman, Tuddenham and Gabelich, to play his first game of League football.

It’s Easter Monday 1962, the opening round of the VFL season and the crowd of 42,000, packed to the rafters, roars its approval of their black and white heroes. His nerves are already taut and he feels as if his head is about to explode, such is the wonderment of the occasion.

Two and a half hours later, as he trudges from the field, there is stunned silence. The Pies have lowered their colours to St Kilda at home for the first time since 1919. The mood is sombre, angry. This is not the way the script was meant to play out …

Seven months earlier, Des Steele was home on school holidays from Xavier College when he was slotted onto a wing by his home-town team, Wangaratta, for their Grand Final clash with Benalla.

He had made an impression in the strong Public Schools competition and Wang coach Neville Waller, himself a former Collingwood player, wanted to ensure that such a precocious talent would be made available for the finals. Steele duly starred as Wangaratta got away to a flier and belted their opponents by 63 points in a dominant display.

By that stage Des had already signed a Form-Four, which tied him to Collingwood, having been spotted in a school game by Magpie mentor Phonse Kyne. His late-season performance for Wang in 1961 only confirmed that the Pies had made a canny choice.

Collingwood organised a clerical job with an oil company. He thrived in the Victoria Park environment and settled in so quickly that he was chosen to make his debut in the opening round. Two further games followed, but then it was back to the reserves. Still, the youngster had had a taste, and optimism for his second season was high.

He was ‘on fire’ in a practice match in 1963 when he jarred a heel, which he couldn’t get right and was out of action for eight weeks. Working his way back to full fitness, he regained his senior spot for the last five games. In the last of those, he waged a great battle with Essendon’s star winger Barry Capuano and was awarded Collingwood’s trophy as the best player in their 27-point defeat.

Remarkably, that was to be Des Steele’s last VFL game.

Collingwood underwent considerable change over the summer of 1963-64. There was a new coach, former great Bob Rose, a new committee and president and a revitalised playing list. But Des spent the season in the reserves, battling injury for most of it.

He had become disenchanted with life in Melbourne and thought it was time for a change. “I didn’t have a car; was living in Clifton Hill, travelling to work at Spotswood, then had to make my way back to Victoria Park for training. It got to me a bit,” he said later.

Preston approached him but instead he opted to return to Wangaratta, where he regained his form and a renewed zest for football.

Old-time Wangaratta fans recall ‘dazzling Desmond’ prancing, dodging, weaving and dancing his way around local ovals with the alacrity of a ballet dancer. He was Wangaratta’s version of Footscray’s 329-game Hall of Famer and champion of the 1980s, Dougie Hawkins.

He was one of the pre-eminent mid-fielders in the Ovens and Murray. In his first season ‘back home’ he won his club’s Best & Fairest and the Chronicle Trophy and played in the Grand Final, which the ‘Pies lost to the Rovers. Wang were there or thereabouts during most of Des’s years with them and contested ‘The Big One’ again in 1966 and ’69. He notched up his second B & F and represented the O &M in a stellar 1970.

With a hankering to coach he took on the job at Milawa for two years, then returned to the ‘Pies for his third stint, in 1975. He was now an ageing star, but had lost few of the tricks that characterised his artistry in the midfield, and he was to play a vital part in a cherished Magpie moment, when they swept to a famous premiership triumph over their arch-enemies, the Hawks, in 1976.

It was an ideal way for Des to round off his O & M career. With premierships in his first and last seasons at Wangaratta (albeit 15 years apart ), 191 games to his credit and subsequent membership of the club’s Team of the Century,  he headed out to Greta as playing-coach for a two-year term. He then added another couple of years as a player-only.

There is no doubt that Collingwood never got to see the best of Des Steele. He was a highly gifted footballer who could have made a bigger impression on the VFL if only injuries had been kinder. And that was unfortunate for both player and club, because his son Darren turned out to be a more-than-handy footballer with both North Melbourne and Geelong.

This is an edited version of an article on Kevin Hill’s blog, https://kbonreflection.wordpress.com We thank Kevin for allowing Forever to use his tribute to Des.