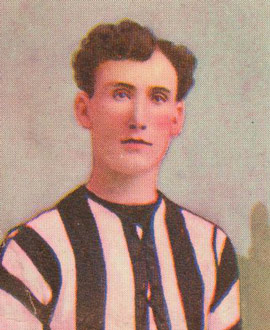 Phil Carman remains one of the most popular, yet frustrating, players of Collingwood’s post-1970s period – a rare mixture of supreme talent combined with all-too-frequent lapses of discipline.

But back in the club’s earliest days, the Magpies had their own early model of Phil Carman – a wizard called Dick Condon.

Like Carman, he was among the most gifted players who have ever pulled on a Collingwood jumper. But – again like Carman – he was prone to individualistic or selfish play, and had problems dealing with figures in authority. The result was a brilliant yet combustible footballer who sometimes drove his teammates and officials to distraction, yet more frequently left them in awe at his ability.

Make no mistake, Dick Condon was one of the most talented footballers the game has seen. In his day, he was a star. Tough judges such as Jock McHale and Bill Strickland later rated him the best footballer they had ever seen, a view echoed by former teammates such as Charlie Pannam Snr and Eddie Drohan.

His great strengths were his marking, agility and pure footballing skills, which were exceptional. He could pick up the ball with either hand while at top speed, and in one movement kick accurately with either foot – a rare ability in those times. Former teammate Eddie Drohan said Condon’s unerring accuracy with passing was equalled by only one or two players in the 30 years after his retirement, and his dual-sidedness was unparalleled for the time. In a game against Melbourne in 1898, for example, he “brought the house down” with a goal from a left-foot screw kick made while hemmed in and running across the face of goal. He could also bounce the ball with either hand, something few of his contemporaries were able to master.

Although quite tall for his time (about 180cm) and lightly built (about 72kg), Condon frequently played as a rover, or sometimes in the centre. Teammates and critics frequently marvelled at his ability to twist in the air while marking, so he could land and take off running in almost the one movement. Former trainer Wal Lee described him as a “footballing acrobat”. “No matter which way he was tossed he always landed on his feet and in a position to be off into his stride in a flash,” he told the Sporting Globe. Charlie Pannam Snr concurred: “He could turn like a hare and had the faculty of marking the ball and going off in the same stride. [He would] take a mark and, while in the air, twist round to face goalwards.” Eddie Drohan concurred. “What a dance he led players with his quick getaway after flying for a mark,” Drohan said. “He seemed to spin in the air, always finding an opening for a quick dash with the ball”.

In addition to his ball skills and agility, Condon added other weapons, including balance, game-reading and cleverness. He was “as full of tricks as a cage full of monkeys”, according to Wal Lee. Former teammate Ted Rowell said he was “cunning, clever, almost uncanny.” “He was the brainiest and cleverest footballer I ever saw,” said Pannam.

His knowledge of the game was also exceptional. Drohan again: “At players’ meetings at Collingwood all were invited to have a say, but Dick held us all spellbound. He could discourse on the game in a manner that inspired, being one of the few who could impart his ideas to others”. One player who benefited immensely from such tutelage was a young Dick Lee, to whom Condon took a particular liking.

This package of talents led many to brand him the greatest player of his time. Eddie Drohan once described him as a “footballing freak.” “I have never seen a player who made as many opportunities for his side and at the same time so few mistakes,” he wrote. “When at Collingwood I studied Condon’s movements and tricks, but he held sole world’s patent rights for most of them. No player could extricate himself from a jam with such dexterity. When he looked to be hopelessly hemmed in he would back out like a crayfish, always with the ball. His baulking and feinting too, nonplussed every man he met. There was no aspect of the game in which he was not the master, and he possessed qualities that no other player could hope to possess.”

But for all his brilliance, it’s impossible to look at Condon’s career without highlighting the other side of the ledger. At its most benign, that included a propensity for selfish play. As the Age noted in 1899, he would be of double the value to his side “if he could be induced to remember that C-O-N-D-O-N does not spell Collingwood.”

More troubling was his rebellious nature. Within a year of joining Collingwood from junior clubs Excelsior, Primrose and Collingwood Juniors, he was hauled before the committee for disobeying the captain (Strickland). The next year he refused to wear the lace-up jumpers favoured by the rest of the team. In 1900, while captain, he was suspended for three weeks for abusing an umpire. Soon after he came back he came to blows with a teammate, Artie Robson, at a three-quarter time break, and later in the season threatened to take his team from the ground in protest at the umpiring.

In the next game, however, it all went to hell in a handcart. Condon violently abused the game’s most famous umpire, Ivo Crapp (delivering the famous insult, ‘Your girl’s a bloody whore!’), and was hit with a lifetime ban by the VFL. That suspension wasn’t lifted until early in 1902.

His temperament didn’t stop his teammates from electing him captain in 1899 – a role that ended with his ‘lifetime’ ban – or the club from appointing him as coach in 1905-06. He had a wonderful football brain, and the same feisty spirit that so often caused trouble also produced a competitiveness that could be inspirational.

Still, it surprised nobody when his short tenure as coach also ended in controversial fashion – suspended by his own club for several weeks in 1906 for being the cause of dissension within the team. Yet, just the year before, Condon had been near-universally considered the best footballer in the competition. Such were the paradoxes that dotted his career.

Condon left Collingwood at the end of that year and headed to Tasmania (where, ironically, he took up umpiring!). He returned to the VFL in 1908 when he joined Richmond without a clearance, and the Magpies responded by refusing him Life Membership: for decades he was the only 10-year player to be denied the honour.

That wrong was finally corrected in 2012, and Dick Condon’s Collingwood story was at last complete. It had been a hell of a ride, but one thing was undeniable: for all the controversy and all the angst, he was one of the most brilliant footballers the Magpies have ever produced.