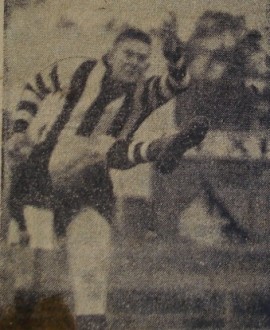 The story of the star country player who is reluctant to come to the city is one of the oldest in football. And it played out through the 1950s with Collingwood and Dick O’Bree.

By 1952 he was already a star forward with Lake Boga, despite only turning 16 midway through the season. Collingwood signed him that year, with a view to him joining the club in 1953. They had set out on a statewide search for new talent in the wake of finishing runners-up in 1952, and signed a bunch of promising country players for many different positions on the field. Their main aim, The Argus reported, was “to try to unearth a full-forward of real class.” Dick O’Bree was that man. (As a sidenote, of the other six players signed in that recruiting spree, only Dave Little went on to play senior football).

In March of 1953, The Argus again reported. “Collingwood, which likes its footballers young, is awaiting the arrival of a 16-year-old giant from the country. He is Dick O’Bree, 6ft.2in., 14 stone centre half-forward from Lake Boga.”

O’Bree duly turned up for one night’s training (after finishing cricket commitments back home) and impressed observers as “a nice mover who marks and kicks well”. He then played one practice match, kicking three goals from centre half-forward, but hurt his knee and headed back home, saying there was too much to do on the farm.

And thus began the pattern. Each pre-season there would be breathless reports saying he was about to train, or to play in a practice match. When he did, he would star. But then he would head home again.

O’Bree kicked 140 goals for Lake Boga in 1953, including one stellar match where he kicked 16 of his side’s 17 goals, only heightening the excitement of his eventual return to Victoria Park. In 1954, after again teasing during the pre-season, he went back to Lake Boga and kicked 92 for the season, including 18 in one game. Many began to wonder if he could ever come to the city, but then he re-signed with the Magpies, just as their initial two-year hold om him was about to expire, and told them he would join up in 1955

But he didn’t. Instead he crossed to Euroa and again was the dominant forward in country football, kicking 97 goals, including nine in the grand final. In 1956 he turned up for a practice match and kicked five on senior full-back Jack Hamilton, including one from 50 yards out on the boundary. By this stage he was 19 and physically mature, so much so that one observer noted he looked like the bigger specimen when standing next to the vastly experienced Hamilton. The next week he had 14 shots on goal.

But still he couldn’t make up his mind about whether to play in Melbourne. “I don’t know what to do,” he admitted to one newspaper. He was married by this time, and employed with the Euroa Shire Council. He made it clear he would only play if he could commute.

Eventually, he committed to Collingwood and the Magpies signed him on a six-match permit in April of 1956. To the surprise of nobody, he was named at full-forward against Hawthorn in the opening game of the season. He took some good marks and kicked 2.3, though often found himself a little too far from goals for his liking.

For once, the hype had been matched by the reality. Here was a kid who could really play. He was already a physical beast, and a very hard man to beat in marking contests, where the famed competitiveness that would underpin the rest of his career would stand out. But despite his size he was also a good mover, and very adept with his leads. He was also a magnificent long kick, and while occasionally wayward he was usually reliable in front of goal.

O’Bree followed his two-goal debut with another brace against South Melbourne at Victoria Park. The fans there were already starting to chant his name. Despite fairly modest returns, he was being touted as the club’s best full-forward prospect since Ron Todd.

The next game was against Richmond at Punt Road. He kicked a goal in the first few minutes and started like a house on fire. But late in the first quarter he and Tigers hard man Col Saddington collided and Dick somersaulted over him. As he fell, his right leg doubled under him, and the audible ‘snap’ signalled a bad injury. Sure enough, two bones in his right leg had been broken above the ankle.

He was taken to the Alfred Hospital where the breaks were confirmed (coincidentally, the nurse who initially looked after him was the sister of Dave Little, the only other senior player to emerge from the Magpies’ country recruiting drive in 1952). At the urging of supporters, the club immediately began planning a benefit ‘pleasant Sunday morning’ and other activities to help raise funds for their wounded newcomer, who had already captured fans’ hearts (the whole benefit ended up raising more than 580 pounds, a staggering amount). Dick was photographed and interviewed in hospital, and he made all the right noises about trying to make it back to Collingwood in 1957.

He succeeded, too, gradually regaining some confidence through the practice matches and playing the opening game of the season. But he didn’t have much impact, and actually asked to be sent back to the reserves to regain touch. After two games there, he headed back to Euroa for the year, hoping to fully regain the confidence he had lost.

The move back home worked, and Dick kicked 93 goals for the season (including 17 in one game). With confidence renewed he returned to Victoria Park for yet another try in 1958, and kicked five goals in his first practice match. He was named on the senior list in early April, but struggled for several weeks with a thigh injury he suffered while training at Euroa. He recovered to play two early games with the Collingwood reserves, but late in May he told the Magpies that he was retiring from League football.

So ended Dick O’Bree’s on-again, off-again attempts at a VFL career. But his country achievements continued to mount up. Over a senior career that continued until 1971, Dick would end up kicking a staggering 1285 goals. He played in 10 senior premiership teams, and coached Euroa to seven premierships in his nine years as coach. Even today he is still widely heralded as that club’s greatest and most influential figure.

Who knows what he might have done had he not been injured and stayed at Collingwood? Given what happened throughout the rest of Dick O’Bree’s career, it’s fair to say that he would almost certainly have kicked goals – and lots of them.