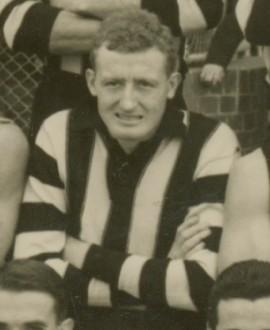 Ginger-haired half-forward and winger from Portland who came to the Pies in 1956 after managing 29 games in three seasons at St Kilda.

He had been regarded as a promising centreman when he first came to the Saints, having played for Portland as a 16-year-old, but most of his senior VFL football was played as a wingman or half-forward flanker. He joined the Saints in 1953, made his senior debut for them the same year and at the end of his debut season won a trophy for ‘Best Promoted Player’ as well as one for the most improved player in the seconds.

He ended up playing three years with St Kilda, never quite managing to secure a regular senior berth despite showing plenty of promise. He started the 1956 pre-season with the Saints again, but crossed to Collingwood soon after with their blessings in the search for more opportunities.

Howell played exclusively with the reserves in his first season at Victoria Park, despite newspaper reports that he was “burning” while playing in the centre with the seconds. He eventually got his first senior opportunity with the Magpies in 1957, when he played the first eight games of the season. He played a further nine in our premiership season of 1958, but missed out on playing in the finals.

Don then played with Frankston, and later acted as playing coach for both McKinnon and Glenhuntly before coaching Old Scotch for four seasons.