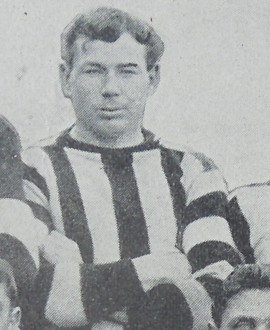 Early in 1909, a Numurkah footballer called Duncan McIvor was reported locally to be about to trial with the St Kilda Football Club, then known sometimes as ‘The Seasiders’.

But Collingwood was waiting in the wings. They had already heard of McIvor’s prowess in the local leagues, and they nipped in ahead of the Saints. Sport newspaper reported that both Duncan and his brother Jack had trialled with the Pies, and that we chose Duncan ahead of his sibling. “With experience he is expected to be a top-notcher,” said the paper.

Just a few weeks later, in the second round of the season, McIvor was making his senior debut for the Magpies – against, almost inevitably, St Kilda.

It was quite a meteoric rise for the bustling half-back, who had not only won fame for his footballing pursuits back home. He was also a renowned athlete who won the Goldfields Sheffield in 1906 at a meet held under lights in Bendigo (Tom Baxter, then of Maldon, won ‘the walk’ at the same carnival), and had a fine reputation as a trainer of young athletes, having trained the winner of the 1907 Stawell Gift, C W Knox.

McIvor immediately repaid the Magpies’ early show of faith, being named amongst the best players in that first game and playing 13 games in his rookie season. He made a big impression with his hard, aggressive running off half-back. He was a solidly built type, but fast, and while his approach wasn’t the most cultured he certainly adding both speed and strength to the Magpies line-up.

So after that encouraging first season it was quite a disappointment when he decided to go home to play with and coach Seymour in 1910. But such was the impression he’d made in 1909 that, after Seymour’s season ended (with a Premiership), Collingwood brought him back into their team just one week before the 1910 finals campaign.

It was an extremely gutsy move, but one that paid immediate dividends. He was a mighty force against Geelong in his first game back, and just two weeks later, in the preliminary final against South Melbourne, McIvor played the best game of his VFL career.

The Age described his game that day as “magnificent”. The Australasian said: “In McIvor the team had a defender superior to all others in the match. According to The Argus he played a “strong, rushing unscientific” brand of football. “The last quarter opened with a fine dash by McIvor, who tore down the centre and drove the ball home,” the newspaper wrote. One of the game’s memorable highlights, it said, was “the way in which the burly McIvor hurled his vast bulk after the ball”.

McIvor played a beauty in the Grand Final the following week too, The Age saying that he “defended stoutly” and The Argus that he “did splendidly in defence”. It completed a superb four-week stint that ended with him holding a Premiership medallion. He continued with 11 further games in 1911, where he was praised by The Age for his “sound and consistent defensive work”.

But then he decided he wanted to go home again, and he returned to play with Seymour. And that’s where he stayed, apart from one stray and largely unexplained game back with Collingwood midway through 1914. His brother Jack went to the First World War and Duncan initially stayed at home to help his parents run the Railway Hotel. He decided to enlist in 1918, and was reportedly “passed for active service”, but did not actually end up serving, potentially on medical grounds (he’d had a severe case of pneumonia in 1917) or possibly because the War itself ended.

Eventually both he and Jack moved to Sydney, and it was there that he died in 1930, after a six-month illness. He was just 46.

Duncan McIvor’s VFL career was a stop-start affair: thirteen games in 1909, four in 1910, 11 in 1911 and then one more in 1914. It can’t have helped his performance levels. But those four games he played late in 1910 were worth their weight in gold, and played no small part in delivering to Collingwood a very special Premiership.