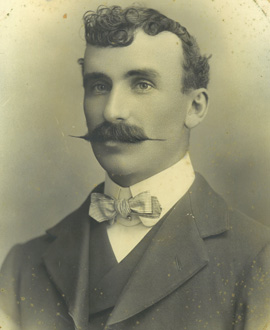 There aren’t many VFL/AFL players who have played in Premierships with two different clubs. There are even fewer who have managed to do so in their first season with each of those clubs.

That is one particularly unusual slice of history owned by Eddie Drohan, an electrifying wingman who shone first with Fitzroy and then with Collingwood in the late 1890s and early 1900s. A brilliant footballer and great clubman, he was something of a lucky talisman for each of his clubs, playing in a flag in his debut season with the Maroons and then again five years later when he crossed to Victoria Park.

Eddie’s journey began in Warrnambool, where he was born in 1876. The family moved to Melbourne when he was young, and he went to St Brigid’s in North Fitzroy. In the mid-1890s he won a medal from that club for ‘All Round Play’. The next year he was playing with Fitzroy Juniors, and by the opening round of the 1898 season he had been elevated to the Roys’ senior side. After his very first game, as a 21-year-old, The Australasian said he “played like an artist”.

He quickly became a regular with the seniors, playing 17 games for the season including the final game of the year when the Roys annexed their first VFL Premiership. He was there again the following year when they went back-to-back, and was named among the team’s best players in each of those big games – a wonderful achievement for one so fresh in the game.

It’s not known why he crossed to Collingwood in 1903, but by the time he did so he was an established star of the competition. He’d already played for Victoria, won two flags, and was regarded as one of the more brilliant centreline players in the game. He was fast and highly skilled and, decades later, reporters were still rhapsodising over the quality of his short passing. “Few players have shown the skill In short passing that Mr. Drohan demonstrated at Collingwood,” wrote The Argus after his death in 1938.

Indeed his mastery of the short pass was one of the reasons he fitted in so well at Collingwood, and he was quick to adopt the stab kick that had been ‘invented’ in 1902 by his new teammates during a trip to Tasmania.

“Eddy Drohan, on the centre line or forward, is known as the busy bee,” wrote Punch one year. “He is a working bee, and gathers in the spheroid like yellow box honey. With his wondrous resources [he] is a star footballer.” “Drohan in the centre shone like a Chinese festival,” wrote the same journal a year later.

Known widely as Ned, Drohan became famous for his wonderful moustache, complete with meticulously waxed ends. “If all other trades failed him, his beautiful wavy hair would bring him fame as a poet,” wrote one newspaper in 1908.

He was also adept at other sports, most notably cricket, where he was an outstanding opening batsman. In 1895-96, while still a teenager, he made the highest individual score in the season for Fitzroy Cricket Club. And he would later open the batting for Collingwood when they made their entry into District cricket.

But Eddie’s contributions wherever he went could not be measured solely by his on-field performances. He also became a key part of the social fabric of the sporting clubs he called home. At Collingwood he often performed at club functions or on trips, and he was renowned as a singer specialising in ‘Irish comic ditties’. He was also one of the driving forces behind a series of social games played at Frankston between 1906 and 1912, featuring some of the biggest names in football at the time, many of whom would share a campsite together at Carrum for weeks or months on either side of the game.

All of this made Eddie a hugely popular teammate, and it was no surprise when he was elected Collingwood captain for the 1908 season. But he relinquished the honour midway through the season after deciding that he wanted to focus solely on playing. He retired at season’s end, just shy of his 100thgame with the Magpies (he had briefly flirted with retirement early in 1904, but luckily returned to the fold after a brief period away from the game).

But Eddie’s contribution to football was far from over. He became an umpire in 1909, then coached at both Melbourne and St Kilda (with relatively little success) before once again returning to umpiring. He also stayed involved with Collingwood, serving on the committee, acting as the club’s VFL delegate and even spending time as vice-president. A long-time employee of the Metropolitan Gas Company (where Ern Copeland was secretary for many years), he would go on to become something of an elder statesman in the game in the 1920s and 1930s.

There was widespread sadness within football circles when Eddie Drohan passed away in 1938. His contribution to the game, across two clubs and through a variety of roles – three-time Premiership player, brilliant wingman, captain, umpire, coach, committeeman, and more – was immense. We were lucky he came across from Fitzroy all those years ago.