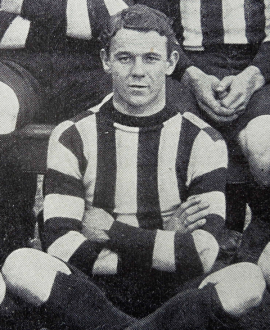 There aren’t many Collingwood footballers who can’t claim to be the most famous person in their family.  But Ernie Bailes was one. He had a high profile father and an even more well known brother (at least in footballing terms) – yet that didn’t stop him carving out a useful career himself.


Importantly, Alf Bailes was also a more than useful footballer and a former captain of the Bendigo Football Club (he also later served as President of that club). Those sporting genes made it through to his offspring.

One of his sons, Barkley, was an early star with Fitzroy. He was a tiny winger –nicknamed ‘Titch’ – who was best on ground in Fitzroy’s 1905 Grand Final win over Collingwood, and who later represented Victoria in the 1908 carnival.

Ernie, the youngest of the Bailes clan and five years younger than Titch, was clearly cut from similar cloth. He played with South Bendigo in 1907 but also played some games with Collingwood District. Early in the 1909 season, the Pies decided he was ready for his senior debut.

He got his start in the Round 2 game against St Kilda, after which he drew some encouraging reviews.

“Bailes is a brother of the Fitzroy champion,” noted The Argus. “He is a little taller than his brother, but he adopts the same style of play – headlong rushes more suited to a dry than a wet ground. As rover, when Vernon was taking a spell, Bailes was at times very effective in his work.”

The Australasian, too, was positive, noting that he had performed ‘excellently’ both roving and forward. All seem to have been taken by his combination of speed and courage, and kicking that was unexpectedly long for such a small man. He played mostly as a rover or small forward, or sometimes on a wing,where he had ample opportunities to display his cleverness.

“E. Bailes appears to relish having more than one player to contest against, for the general result is that the opposing players are left wondering where Ernie has disappeared to,” noted the Brighton Southern Cross after one game.

Despite those promising debut reviews, Ernie was dropped after his first game,returned for another the following week against Richmond and was then dropped again, not to return. His Collingwood career was over after just two games.

He transferred to Brighton midway through 1909 and forged a splendid career for himself at the lower level. Titch joined him there in 1910, after his VFL career ended, and the two brothers became lynchpins of the Brighton side.

Another member of the Bailes clan, Alfred Jnr, also made a name for himself at Brighton – though not in quite the same way as his brothers. Alfred jumped the fence during a Brighton game in 1912 after a Williamstown player had flattened Titch, and evened the score in no uncertain terms. He was later charged by police, hauled before the courts and fined.

Both Bailes boys kept playing at Brighton until 1915. One of their nephews, seven-year-old Leslie, was killed late that year when he was struck by a train while crossing tracks in Hampton. Early the following year, Ernie decided to enlist and join the forces at the Front.

Ernie was 27, a stove-and-gas fitter and married with two children by this time(he ended up with three). He joined the 12th Reinforcements of the 24th Battalion in February of 1916 and left Australia on the Euripides in April, later joining the 29th Battalion. He suffered a number of illnesses in his short stint in the lines, including scabies, bronchitis and laryngitis. It was the last of those, chroniclaryngitis, that eventually saw him deemed medically unfit and he returned to Australia midway through 1918.

Like many footballing soldiers, Ernie returned to the playing fields after he came back to Australia, managing one final season with Brighton. He might have been small, but he was always a gutsy competitor – no matter what the field of battle.