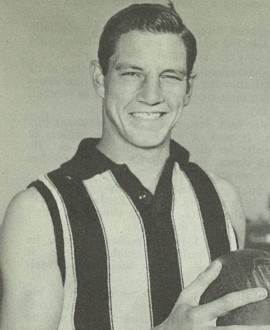 If you wanted to know which part of Ernie Hug’s game was his strong suit, you only needed to look at his hands.

They were huge. They could span around 28cm – which was only marginally less than those of Neil Mann, who was famously photographed holding 24 eggs in ONE hand in the 1950s.

But Ernie Hug’s hands were only part of his story. He remains one of the more intriguing characters to have pulled on a Collingwood jumper, and his family story is perhaps one of the most tragic in all of football.

Ernie began his career at Collingwood in 1963 after being recruited from St Patrick’s College in Sale, where he was captain of the football team. But he wasn’t your standard country recruit.

His father owned two sawmills and a 7000 acre property with a Hereford stud farm at Heyfield, near Gippsland. He drove a Rolls Royce Silver Cloud. Ernie would be up at dawn every day to work on the farm, and because of the distance he could make it to training only one night a week.

So he did remarkably well to make his senior debut within 10 weeks of arriving at Victoria Park, even if it was only to be named on the bench and stay there throughout the game.

Part of the reason for his rapid ascension was his physique. Ernie was a magnificent specimen of a footballer, standing around 193cm tall (6’ 4”) and weighing around 87kg. He was super strong even before he hit the weights in the clubrooms. That strength, combined with his enormous hands, good judgement and great stamina, made him a formidable foe in any marking contest, even from his earliest days at the club. He wasn’t quick by any means, but his marking alone – combined with his thumping kicking and good ‘engine’ – made him a promising prospect.

The Magpies tried him both forward and back in his early reserves outings but they eventually settled on a back pocket, with occasional stints in the ruck. He played only the single game in 1963 and just two more the following year, both from the bench and with almost no game time, before becoming a regular with 15 in 1965 (he missed four through suspension).

Unfortunately a persistent knee injury forced him to the sidelines for the whole of 1966. But he was so keen to play again he actually got his grandfather to build him his own leg-strengthening machine (based on one he’d used at Frank Sedgeman’s gym) on his parents’ property at Heyfield to exercise his knee. By the time he returned in 1967 he was fit and ready to go.

He hit the form of his life that year. He played in every match, marked everything in sight and ended up finishing third in the Copeland. He took 14 marks in one game against South Melbourne. Against Melbourne it was 11 – including eight in a stunning last quarter where he proved virtually impassable. By the end of the season he was playing centre half-back. The next year he played for Victoria against South Australia at the MCG.

His brilliant form attracted his first serious bouts of publicity. In 1967, The Herald mentioned that there was “a good story behind those hands that have been pulling down mark after mark in Collingwood’s full-back line in the past few weeks.” The journalist then noted that those same hands looked after a $10,000 prize bull, and piloted a Rolls Royce Vanden Plas – which had been a 21st birthday present a couple of years before. He was photographed feeding the cattle on the family farm from the window of his flash car. A few weeks later, a 900kg Hereford bull destined for the Hug farm was photographed wearing an oversized Collingwood guernsey when collected by Ernie.

It was that same Rolls Royce car which Ernie drove to training at Victoria Park, and to matches at weekends – prompting lots of ribbing from teammates, opponents and, of course, rival fans. He was a long way from your average Collingwood player, even though he was an extremely quiet and unassuming guy. But while he was dominating the air at weekends, nobody cared about anything else.

Unfortunately his form began to taper off after 1968, and he played only two games in each of the 1969 and ’70 seasons. He played a further year at South Melbourne, for 15 games, before returning to Heyfield.

But the Hug family story would soon take a number of tragic twists. In 1977, Ernie’s dad (also named Ernie), was killed in a level crossing accident on Heyfield Road. A year later – to the day – Ernie himself died in a logging accident on the family farm, when a tree fell across the bulldozer he was driving. He was just 34. One of his sons, Ernie Jnr, turned into a very good young player and was taken by Collingwood at No.106 in the 1989 national draft but never played a senior game. He was later drafted by both the Swans and the Hawks but couldn’t break through there either. He was playing for Sale in 1993 when he was hit in the throat and suffered temporary paralysis. Years later, and just after he had successfully returned to the field, his brother Peter died after an accidental collision during a match at Traralgon.

That’s an unbelievably awful series of events. But they don’t diminish the memories of Ernie Hug Snr standing tall in defence, taking mark after mark in his heyday in the late 1960s.