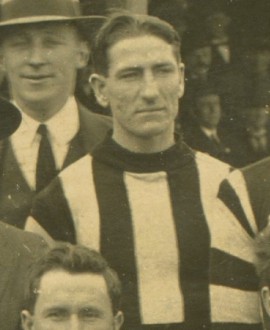 Fred Keays’ VFL career was brief – just five games with Fitzroy and three with Collingwood – but the fact that he ever played League football at all was a remarkable achievement. Because he had twice been wounded in action during the First World War – and the second of those incidents happened just 18 months before his VFL debut.

Fred’s inspiring story of bravery and courage began when he enlisted in November of 1915 as part of the 15th Reinforcements of the 8th Battalion. Fred was only 16 years old at the time, having reached that age just four months earlier, but filled out his form proclaiming his age to be 18 years and 6 months. To make sure he was successful he brought along a note from his father, Thomas, consenting to his enlistment for active service.

Fred left Australia in March 1916, and went to Egypt first, then France, and was wounded in action there in August. He rejoined the fight in Belgium and was wounded in action there again a year later, this time suffering damage to his right leg, and was sent to England to recover. He remained in hospital and recovering into the early months of 1918, and eventually arrived back in Australia in March of 1919.

Incredibly, just a few months later, having played some games with Fitzroy Districts, he was making his debut for Fitzroy in the VFL in their Round 12 match against Essendon. He was named in the forward pocket but seems to have played in the back line, where one newspaper noted him “defending grandly”. The Argus said he was a player “with weight and go who made a fine start with Fitzroy”.

Keays certainly had plenty of ‘weight and go’. He was a strongly built running defender, whose major attributes were his strength and speed (he is believed to have run messages at times during the War, and competed at Stawell several years after retiring from football). He was tough at the footy and a hard competitor. But he just couldn’t hold down a regular senior spot. He was dropped after his second game, and only made one more appearance for the rest of the year. It was a similar story in 1920 as well, when he managed only two senior games, spending the rest of the season with the District side. He tried his luck with Collingwood in 1922 and managed three games there, some of them in midfield, but returned to the Fitzroy seconds after that single season.

After he gave the game away he became a trainer for the Fitzroy Football Club, a role he filled for the rest of the 1920s and 1930s. He put his attributes as a trainer to even better use in 1940 when – remarkably – he signed up to serve in the Second World War with the 13th Australian Field Ambulance. And whereas he’d overstated his age to get into the First World War, this time around he understated it so he appeared to be under 40. He stayed with the service until the end of 1945, whereupon he returned to his lifelong career as a bootmaker, and looking after his large family.

The Second World War cost Fred and that family dearly. The oldest boy of his nine children, Desmond, (who had played reserves for Fitzroy) died in the Sandakan Death March in 1945. Another young man, Kevin Couchman, who had almost become like an adopted son to Fred, was taken and held as a PoW.

Fred never talked to his children about his time in either of the Wars, but those closest to him knew that both affected him deeply. On Anzac Day he would have a few beers, grab his photos of Desmond and shed a tear in private.

But he never lost his love for footy. Even late in his life, when he was ill, one of his grandchildren was brought in to see him. All Fred did during the visit was give the teenager footy advice.

That love of the game seems to have made its way through the generations, along with the sporting talent genes. One of Fred’s sons, Terry, played A Grade football and was hard and tough like his dad. Another, Gerald, who had survived his service in the Second World War, was a good player and a fine cyclist.  One of Fred’s grandsons, Terry, was a prodigiously talented junior footballer who played senior football with Collingwood at age 16 and ended up totaling 45 AFL games with the Pies and Richmond in the late 1980s and early 1990s. Another grandson, Matt, was invited down to Fitzroy as a 17-year-old, while yet another, Anthony, played district cricket.

Fred Keays’ willingness to serve his country was exemplary, having volunteered for both World Wars. He also gave great service to Australian football, especially the Fitzroy Football Club. He only had the one year at Collingwood, but footy clubs always benefit when men of such character come through their doors, however briefly.