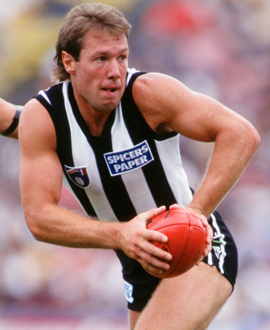 Brown’s commitment to the Collingwood cause made him a favorite at the club. He started as a winger when he came from Templestowe and showed himself to be an absolutely fearless player in all situations.

Alongside Gavin Crosisca, Damian Monkhorst and Mick McGuane, he played in the Collingwood under-19s premiership side of 1986 and that was the launching pad for the team that would eventually win the 1990 senior Grand Final. Off the field he was extremely quiet in his early years and thus earned the nickname of “Rowdy”.

Brown was a popular and integral part of the 1990 flag team and when he was felled at quarter time it precipitated a huge brawl. He was made skipper in 1994, but struggled in 1995 and 1996 as hamstring injuries restricted him. Talk was rife of other clubs chasing him, but he stayed with the Magpies and continued to serve the club nobly.

Just when many were writing him off he made a brilliant response in 1997 and led the Victorian team in his best season for years. In the state game he showed the way to his teammates by totally negating the dangerous Darren Jarman.

Over the years much of Brown’s work was not reflected in statistics. His fierce tackling and tenacious work at ground level paved the way for others, and he was considered the ultimate team man.

He wasn’t keen on meekly handing over the Collingwood captaincy at the end of 1998, but the club considered it was time to pass the baton to Nathan Buckley. Even Buckley said in mid-season that he had not thought the change necessary and was afraid that change had been made for change’s sake.

His performances in 1999 showed that he still had plenty to offer when many thought that his battered body had absorbed enough punishment over the years. He came third in the club best and fairest voting and turned in a year of consistent high quality football.

In 1999, despite the side’s struggle at the foot of the ladder, he seemed to thrive on the enthusiasm that was generated by the youngsters around him.

His five seasons as captain from 1994 to 1998 would be enough on its own to ensure a place in Collingwood’s Hall of Fame, but he also won the Copeland Trophy as best and fairest on three occasions – 1989, 1994 and 1997- and was twice an All-Australian selection.

Ever the ultimate clubman, Brown was a conditioning assistant in 2001 before taking an assistant coaching post from 2002 until the end of 2007.

He then led the rebirth of the club’s stand alone VFL team, where he oversaw the development of several 2010 premiership stars before moving to Carlton at the end of the flag campaign.

After three years at Princes Park, Brown took up a role as a development coach at North Melbourne ahead of the 2014 season.