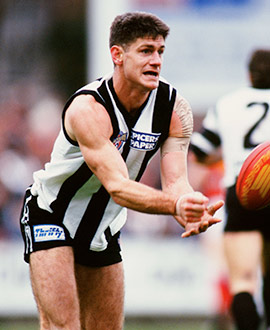 Gavin Crosisca was the kind of player teammates love to have on their side: tough, unrelenting, a guy who left everything out on the field every time he played.

He was a Premiership player at 22, and an under-19s flag-winner before that. He placed in the Copeland three times, and won three “Wrecker” awards for his bone-jarring tackles and penchant for the one-percenters. His final tally of 246 games tally puts him among the club’s elite.

Yet for all those achievements, it may well prove to be that his most important contributions to the Collingwood Football Club – and to his teammates – came years after he finished playing.

Crosisca was born in Brisbane and played his junior footy with the Moorooka Roosters. By the age of 16 he had starred in the 1984 Teal Cup competition (making the all-Australian team alongside names such as Garry Lyon, Darren Bewick, Steve Silvagni, Ron McKeown and Craig Starcevich), had played senior football for Western Districts, and represented his native Queensland. It was former defender and later gun footballing administrator Andrew Ireland who saw the talent and first recommended him to the Magpies.

Gavin moved to Melbourne in 1986 and started with our under-19s under coach Keith Burns. His mother Kay packed up her own life when he moved to Melbourne, coming with him and taking her support beyond simply watching all his games by taking charge of the club’s Coventry House, where a host of Magpies from interstate and country Victoria nested.

That year produced a flag for the thirds, and Burns’ post-season notes on his young charge proved prescient: “Powerfully built young player shows a determination to succeed. Excellent running player, reasonable skills on both sides of his body (kicking needs further work), straight lines the ball well, takes a strong overhead mark, is a very good team man and is tough. Needs to gain in speed and improve concentration.”

Crosisca went straight from that under-19s flag into the senior team for Round 1 of the following season. He played seven senior games in 1987 – a promising start.

But in 1988, Gavin’s world was turned upside down when Kay passed away suddenly just before the start of the season. He flew to Brisbane twice in the space of a week – once for her funeral, and six days later for the season opener against Brisbane. From that moment on, he resolved to honour her memory by doing everything he could to play in a Magpies’ Premiership side.

Despite his grief, Crosisca cemented his place within Leigh Matthews’ revamped side in 1988, and again represented his native state in the Bicentennial Carnival. Incredibly, given the changing eligibility of state football, he would have the distinction of representing Victoria, Queensland and The Allies over the course of his career.

He was third in the Copeland Trophy in his third season (1989), and was a key member of the side that broke the club’s 32-year Premiership drought in 1990. (For a brief moment, he feared he might have missed the Grand Final after he suffered a corkie sliding down the bannister at the Peninsula Golf Course during a moment of “high jinx” on a club retreat the week before the match, as revealed in Michael Gleeson’sCakewalk).

Crosisca’s two goals in the second quarter of that 1990 Grand Final were significant in a game-defining term. The first was a trademark long, left-footer on the run from 45m out and the second came after he floated across a pack to take a contested grab. By the time the game ended he was among our very best players. 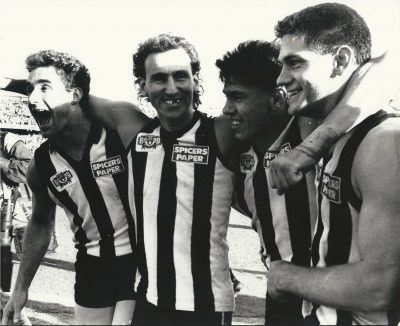 Gavin celebrates after the siren in 1990 with James Manson, Peter Daicos and Denis Banks

At the start of his career, he initially played off half-back, where his ferocious tackling and attack on the football seemed a natural fit. He was a hard, uncompromising player whose flint-edged honesty earned him the nickname ‘Bagger’, and whose appetite for the contest always won the admiration of his teammates. He was strong above his head, moved well across the ground and his kicking developed to the point where it became a weapon. In short he seemed like an ideal half-back.

But as his confidence grew his attacking forays out of defence convinced coach Leigh Matthews to use him more consistently in the middle of the ground, with his creativity an asset. During this time Tony Shaw described him as “the best half-back in the league and (he) is now one of the best ruck-rovers”.

The years after the flag were trickier. He would later admit that his own standards of professionalism dropped in the early 1990s, and he was plagued by ongoing back, groin and hamstring issues. But his determination to overcome the obstacles saw him regain his status within the team, finishing third in the 1995 Copeland Trophy. Two years later, he became only the third Queensland-born player to reach 200 games. And he enjoyed his most consistent season – as a 29-year-old – when second to Nathan Buckley in the 1998 best-and-fairest award.

A persistent foot injury and the club’s youth policy in Mick Malthouse’s first season as coach counted against Crosisca in 2000, his final year. But fittingly, he made his way back into the senior team late in the season – on merit, not sentiment. His final game came against Essendon in Round 22, when he and fellow under-19s alumnus Gavin Brown bade farewell together.

But in the early 2010s he shocked the football world when he revealed the alcohol and drug dependence he had endured throughout his playing career – and beyond. He admitted he had been addicted to alcohol and cannabis during his playing career, adding speed once retired, and that those addictions had nearly destroyed his life. But newly clean after his wife Nicole forced him into rehab, Gavin came out the other side determined to use his own experiences to help others. “I want to make this my life,” he said at the time. “I will tell this story every day for the rest of my life if it makes a difference.”

And true to his word, that’s what he has done. He helped set up Sober Living Rehab, which provides drug and alcohol addiction treatment services, and has told his story to many different audiences in many different settings, inspiring and educating others in equal measure.

Then he dramatically increased his involvement in the Collingwood Past Players Association, his enthusiasm and drive helping to re-energise the organisation. A particular focus for him has been in the player welfare area, improving support for former players struggling with injuries, mental health or other issues once their playing careers have finished. More than 20 years after his own career ended, he’s still looking out for not just his own teammates, but all former Magpies.

It’s that kind of selflessness and commitment that made Gavin Crosisca such a respected and loved member of the teams he played in. And it’s helped turn him into a significant figure in the ongoing community battle against drug and alcohol addiction, and also in the fight to help former players who might be doing it tough. As wonderful as his playing career was – and it really was wonderful – these feel like even more meaningful accomplishments.