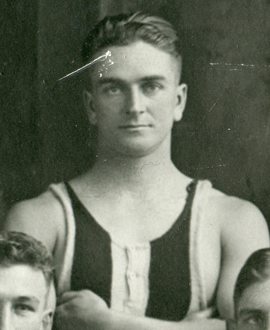 George Beasley could have been forgiven for thinking he was cursed in his sporting endeavours. During his sporting life he suffered a case of diphtheria, severe blood poisoning that laid him up for three weeks and two serious knee injuries that all but ended his career. But Beasley never bemoaned his misfortune; instead he was grateful for the opportunities he received.


Born and raised in Warrnambool, Beasley moved to Melbourne as a 16-year-old to work at the GPO. He lived in Abbotsford and tried out for the Collingwood district side, but then gave football away briefly and began chasing a cycling career. His brother, Jack, was an Australian champion and world record holder. Inspired by the example of his sibling, whom he trained when he broke the world’s record for 100 miles on the road, George himself won a 50-mile race. As one of the favourites for the Shepparton Wheelrace, Beasley crashed heavily in the first heat. Following the fall, he suffered from blood poisoning and was told to rest for almost a month. After that, he figured football might be more forgiving than cycling.

Then a fireman based at Station No.3 in Carlton, where Charlie Tyson also worked, Beasley was invited to senior training with the Magpies immediately after impressing in one of the Fire Brigade matches. In those days he had to endure two games in one week – with the brigade on a Wednesday and Collingwood on the Saturday. Failure to play with his work team meant he would be rostered to work on Saturdays.

At different times, Beasley filled almost every position on the field. At 175cm and 73kg, he possessed the ideal physique for a utility player. The Sporting Globe said: “George plays the ball all the time, and in all the years he has been playing, has never been cautioned.”

But Beasley’s progress with Collingwood came to an abrupt halt midway through the 1927 season. He had suffered from diphtheria earlier in the season, but it was a knee injury suffered on the club’s hiatus in Perth that would prove to be his undoing. In one of two matches against a combined WA side, he displaced the ligament in his knee. When he attempted a comeback the next year, he kicked an early goal before going down with yet another season-ending knee injury.

Beasley was cleared to Williamstown as captain-coach in 1929, though his knee was never the same. He also turned out for Oakleigh in 1930. His two sons, George Jnr and Reg, later played under-19 VFL football (George with Collingwood, Reg with Carlton!), so they’d clearly inherited some of their dad’s ability. One can only speculate on just how good George Beasley might have been had injuries and fate not intervened.